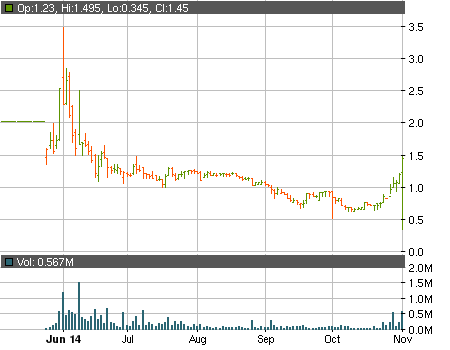 For the last 9 sessions the stock of GrowBlox Sciences, Inc. (OTCMKTS:GBLX) has closed in the red only once. And although the stock is among the more expensive marijuana pennystocks it is still climbing further up the chart. Yesterday the company added another 20% to its value and closed at $1.45 per share. The traded volume for the day of 567 thousand shares was 6 times higher than the average.

Unlike some of the other marijuana pennystocks though GrowBlox are not attracting investors solely because of the general hype associated with today’s elections. Back in August the company applied for 4 licenses (1 for a cultivation facility and 3 for dispensaries) in the state of Nevada but since then there have been no updates. The authorities had until yesterday to review the applications and announce the approved recipients.

GBLX indeed published a PR before the start of yesterday’s session but it had no connection with the licenses. Instead the company announced that they will be hosting a medical cannabis conference on November 14 in San Juan, Puerto Rico. They didn’t give consent to be revealed in the medical marijuana dispensaries list so investors have to wait for an official PR about the outcome.

In the meantime let’s take a look at the company’s financial results. GBLX entered the marijuana industry back in March and despite the short amount of time managed to amass significant cash reserves. At the end of June they had:

The lack of revenues and the sizable net loss could see improvement if GBLX begin operations. There are some things that need to be taken into consideration though.

In order to acquire the impressive amount of cash a couple of private placements had to be performed. Millions of units consisting of 1 share and 2 warrants were sold at just half a dollar. Furthermore around 5.1 million shares have been issued as a conversion of notes at $0.26. If the people who got these shares still own even a portion of them they could reap significant profits at the current market price.

Ultimately the fate of the stock will depend on whether or not they received the marijuana licenses. Many investors believe that GBLX is among the approved companies but there is no official confirmation at the moment.