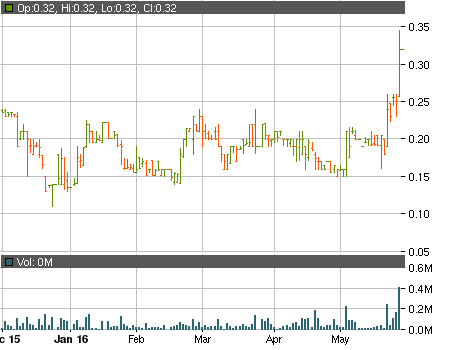 Right before the weekend the stock of Growblox Sciences Inc (OTCMKTS:GBLX) made a rather spectacular move up the chart. It surged by exactly 28% and arrived to a close at $0.32 per share. Even more impressive was the amount of traded shares – investors shifted over 400 thousand shares, which is 6 times higher than the monthly average. The last time GBLX saw comparable trade volumes was nearly 8 months ago at the start of October 2015.

The positive outcome of Friday’s trading, however, wasn’t supported by anything immediately obvious. The last PR issued by GBLX came at the start of last week, and admittedly, was rather encouraging. In it the company announced that it had received an occupancy permit for its 28 thousand sq. ft. cannabis cultivation facility in Las Vegas, Nevada. Seeing that the company is making progress with its business plans could explain the change in sentiment displayed by the market but getting overly-excited may not be a wise decision.

GBLX is actually a bit behind on its plans. In an 8-K filing from April 14 the company anticipated that it will be able to introduce 800 small cannabis plants to the facility in early May followed by a revenue generating harvest no later than late July or early August. These dates will now be most likely pushed back and this will put even greater strain on the already limited financial resources of the company.

Opening the latest quarterly report shows that at the end of December 2015 GBLX had:

Things get even more depressing when in the same April 14 8-K form it was stated that the company had to implement a furlough of all of its science-related officers and employees as part of its cost-saving measures. In addition, back in January GBLX vacated its offices.

At least GBLX were able to amend their deal with Pacific Leaf Ventures, LP, allowing Pacific Leaf to make up to $1 million in additional advances to the company. Investors should keep in mind, however, that the convertible note owned by Pacific Leaf could now reach a total aggregate amount of $2.75 million while the conversion price was reduced from $0.50 to $0.25 per share.

Ultimately, GBLX projects that its cultivation facility will have 4000 cannabis plants resulting in annual revenues of over $20 million. Even if you believe that the company will eventually be able to generate such revenues from its operations you should still use caution. Don’t underestimate the risks, do extensive due diligence and adjust your trades accordingly.