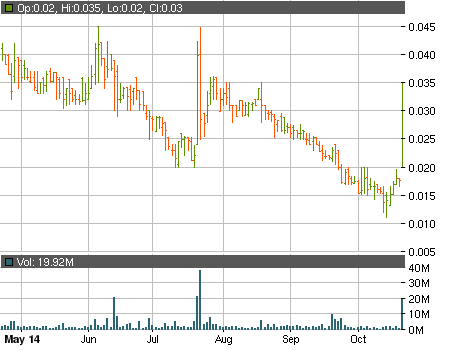 Yesterday the stock of Hypersolar Inc (OTCMKTS:HYSR) made a huge leap up the chart after a new PR article was published early in the morning. The news was enough to put investors into a state of buying frenzy that resulted into nearly 20 million shares changing hands. The increased attention caused a corresponding increase in the price of the stock and it closed the session with a gain of over 69% at $0.03 per share.

The press article revealed that HYSR have achieved another milestone in the development of their technology to produce renewable hydrogen by using only sunlight and water. The company has come up with a novel reactor design and system architecture that could significantly decrease the costs of producing hydrogen fuel. Before you get too excited though there are some rather serious facts that need to be taken in to consideration.

Back in July the stock made a similar move once again sparked by a PR but it suffered a devastating crash on the very next day. This signaled the start of a negative trend that lasted several months and it brought HYSR to a low of just $0.011 last Tuesday. This time the announcement is far more substantial but is it going to be enough to keep the stock from repeating the same pattern?

On September 23 Hypersolar filed their annual report for the fiscal year ending June 30 and it contained some distressing numbers:

The lack of revenues is not that surprising for a company trying to develop new technologies but still HYSR is in a grim financial state. Not to mention the continued dilution of the common stock that is reaching alarming levels. For the twelve months covered by the report the outstanding shares grew from 194 million to 429 million. As of September 22 that number stands at 448 million. 180 million of the newly printed shares were issued as a conversion of debt totaling $443 thousand. On July 24 another 19 million shares saw the light of day again as a conversion of debt and were priced at $0.0017 .

The current news may be optimistic but HYSR still needs to achieve a voltage of 1.5V in order to complete their system. The last update on their progress came back in February when the company announced that they have reached 1.2V.

The potential of their technology cannot be denied but the numerous red flags around them are too serious to be ignored. The millions of extremely cheap shares could have a devastating effect on the performance of the stock and the company might be force to sell even more convertible notes in order to fund its operations. That is why it is paramount to do your own research before putting your money on the line.