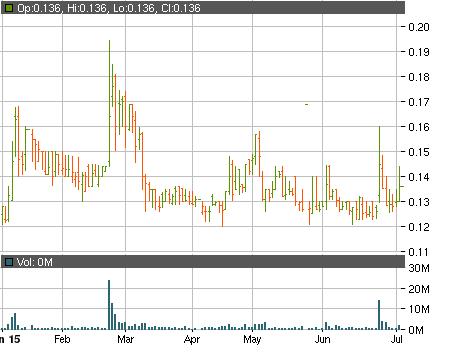 Right before the holiday the stock of Liquidmetal Technologies Inc (OTCMKTS:LQMT) spiked up the chart registering a gain of 4.5% and closing at $0.136 per share. Interest in the stock also rose with investors exchanging 2.1 million shares while the 30-day average volume for the stock stands at 1.45 million. Will the positive momentum survive the weekend though?

Well, so far 2015 has been nothing short of a roller coaster ride for the stock of the company – almost every move up the chart has been immediately followed by a steep correction. There is a reason for the inconsistent performance.

LQMT are the developer of the amorphous alloy called liquidmetal. This alloy is supposedly nearly 2.5 times stronger than titanium and 1.5 times harder than stainless steel. How promising the material truly is becomes quite obvious when you take into consideration the fact that none other than Apple Inc. (NASDAQ:APPL) entered into a licensing agreement with LQMT back in 2010. Since then the agreement has been extended several time – the latest amendment took place back in May when the deal was extended to February 5, 2016. Apple have indeed implemented the liquidmetal alloy in their SIM ejectors but despite regular rumors that in the next device the material will have a bigger role so far that has not been the case.

The movement of LQMT’s stock has been negatively influenced by the financial results of the company. Despite several years of attempts to commercialize the amorphous alloy the results have been far from encouraging. The financial report for the first quarter of 2015 showed that revenues fell by 85% compared to the same period last year. The annual revenues for 2014 were down 40% compared to the results for 2013.

At the same time the executive team of the company has been compensated rather generously – page 37 of the annual report for 2014 reveals that the bonuses for the management team almost doubled in 2014. The CEO Mr. Thomas Steipp received a total compensation of $1.7 million for 2014 (the sum includes $1.1 million in stock options).

At least LQMT have sufficient resources to fund their operations during the next several quarters. At the end of March they had $6.2 million cash and $2 million in restricted cash. On June 9 the company announced that it has delivered its first production parts for an innovative knife for the California based Miltner Adams Company.

If the liquidmetal alloy finds traction the company might be able to stop the drastic decline of its revenues. Until that happens though any trades involving their stock must be attempted only after extensive research and careful planning.