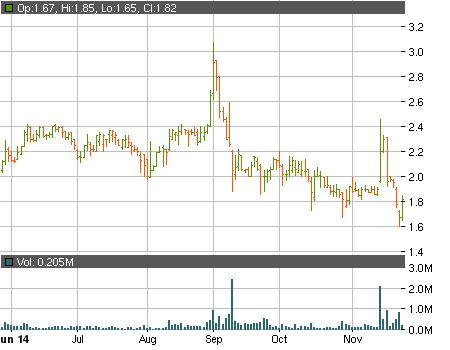 A mid-November push sent ImageWare Systems, Inc. (OTCMKTS:IWSY) on what could have been the path to recovery. However, after just two green sessions the stock slingshot around and a streak of red sent it to its six-month low at $1.67 per share on Tuesday. Wednesday brought the bounce, with IWSY putting on 8.9%.

The company climbed in mid-November, likely driven by a couple of press releases concerning IWSY‘s GoVerifyID solution and its presentation within the Fujitsu Retail Solution Marketplace. The company announced an increase of its $3 million line of credit to $5 million in a PR dated Nov 18. On the same day the price sank like a stone. The announcement of the change in the line of credit cannot be blamed for the price drop as the PR came in the afternoon and IWSY opened with a significant gap down right from the bell.

Additionally, the company’s extended credit agreement included provisions for the conversion of an additional $2 mill into IWSY shares at $2.30 – the price the stock closed at on Nov 17 – a generally good deal, considering this was the highest price the company logged over the past three months. IWSY announced the company does not ‘anticipate’ the use of this extended credit.

Here is what the company published in its latest quarterly:

The company burned through a significant portion of its cash during the quarter, with less than half a million remaining against cash of $1.4 million as of June. Revenues for Q3 were comparable to those of the previous quarter, with no dramatic difference.

Everyone has their eyes on the company scoring those big contracts for its products. In response to this general sentiment, CEO Jim Miller stated in a Nov 17 conference call that the company’s partners include huge, multinational corporations and negotiations can be delayed by ‘a quarter or even two’.