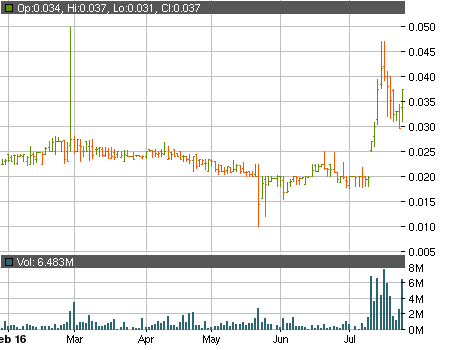 On July 12 Kraig Biocraft Laboratories Inc (OTCMKTS:KBLB) announced it had received a contract valued at up to $1 million from the US Department of Defense. The news had a tremendous effect and investors began rushing towards the stock of the company. Thanks to the ecstatic buying in just four sessions the market price of KBLB‘s shares more than doubled reaching a high of $0.047 on July 15.

When the initial enthusiasm started to cool off and investors realized that for now KBLB are going to receive approximately $100 thousand for a batch of ballistic shoot packs made from the company’s proprietary Dragon Silk material, which the DoD is going to use for testing, a lot of investors suddenly decided that it might be a good idea to start taking profits. KBLB‘s stock collapsed under the heightened selling and wiped a significant portion of its gains. After several sessions of losses the ticker found itself closing at $0.03 on Monday.

Instead of sliding even lower down the chart yesterday KBLB managed to bounce hard thanks to the new PR that was issued by the company. It announced that KBLB have taking possession of a new production facility in Indiana. Reinvigorated by the news investors once again showed considerable support for the stock pushing it to a close over 26% in the green at just below $0.0375. Is this the start of a new uptrend or is it just a brief hype-inspired bounce?

Well, no matter how excited you might be about KBLB‘s potential you shouldn’t take the risks around the company lightly. The company may receive some proceeds from its US Army contract but for now they will barely have any positive effect on its financial state. Don’t forget that at the end of the first quarter of the year KBLB reported the following results:

In order to raise some much needed funds between January and May KBLB had to sell approximately 18 million shares at $0.018. In addition, in April and May around 9.5 million shares were printed as a cashless exercise of warrants. As of May 5 KBLB had 734 million outstanding shares. The company doesn’t have to worry about maxing out its authorized amount of shares because it actually has unlimited authorized shares.

The volatility of the stock and the serious red flags must be taken into account when contemplating whether to put any money into KBLB or not.