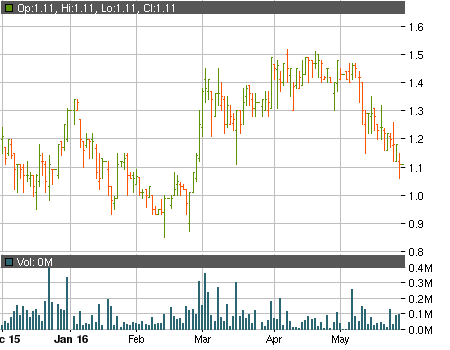 On May 9 the stock of Imageware Systems Inc (OTCMKTS:IWSY) closed the trading session at $1.45 per share. After slashing close to 6% last Friday the ticker is now sitting at $1.11. This means that in just three weeks IWSY have lost nearly 25% of their value.

The downtrend of the stock could be attributed to the underwhelming financial results for the first quarter of the year. The financial report covering the period was filed on May 10 and contained the following numbers:

Compared to most other pennystocks IWSY is in a far better state with respectable cash reserves, over a million in revenues and lack of any toxic debt. The problem is that on a year-over-year basis the balance sheet barely shows any progress. The revenues are up by only $50 thousand while the net loss has been decreased by less than $60 thousand. At the same time the reduced cash at hand means that IWSY now have a working capital deficit of over $520 thousand.

During the conference call discussing the quarterly results the CEO of the company talked about the integration of TransUnion’s ID Manager product into IWSY‘s GoVerifyID application, getting Extenua as a customer, and signing an agreement with FEMSA, a NYSE listed company. The chart performance of the stock, however, shows rather clearly that investors were far from thrilled by these announcements.IWSY‘s latest PR came two weeks ago so it remains to be seen if a new press release will manage to change the sentiment towards the stock.

Imageware Systems may lack some of the more glaring red flags usually found when dealing with pennystock companies but that doesn’t mean you should skip on doing your own due diligence. Use caution and plan your trades carefully before putting any amount of money on the line.