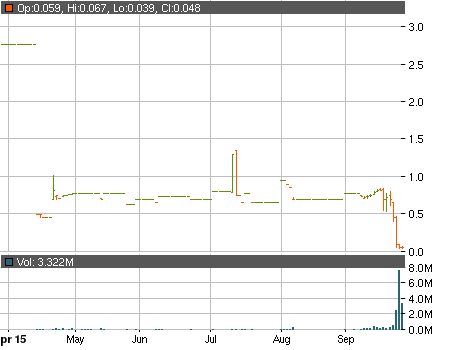 On September 15 the stock of Aqua Power Systems Inc (OTCMKTS:APSI) closed at $0.815 per share. Would you like to guess what the closing price of the stock was at the end of last week? – $0.048 per share! That is right, in the span of exactly 9 sessions the company managed to obliterate over 94% of its value. Although in the world of pennystocks a rapid loss in valuation is far from unusual APSI‘s devastating drop is definitely a rare sight. But what could have caused it?

While the financial state of the company is far from inspiring it alone cannot have brought such a disastrous slide. According to the latest financial report as of June 30 APSI had:

These results did not include the numbers from the new subsidiary of the company that according to the this 8-K filing has generated $200 thousand in revenues during its most recent fiscal year. Not to mention that at the start of September 105,8 million of APSI‘s outstanding shares were exchanged for 1,5 million Series A preferred stock, definitely a positive step for the company. This left APSI with a little over 59 million outstanding shares.

No, the reason for the stock’s collapse lies elsewhere. A few weeks ago a landing page touting the stock of the company was created. It stated that APSI has “the potential to double, triple, or quadruple your investment”. Well, apparently the pumpers couldn’t have been further from the truth and those who jumped in based on the promises of the landing page might be bitterly regretting their decision. Keep in mind that despite the stock’s horrific performance the entity behind the pump has received a production budget of $30 thousand.

And when a pennystock is targeted by a paid promotion this almost always means that there are some rather cheap shares that could be liquidated during the campaign. APSI is not an exception. As we warned you in our previous articles a few years ago when APSI was still operating under its previous name a group of shareholders agreed to sell 1,451,318 shares at a price of $0.15 per share or a total of $217,703. Thanks to the 18-for-1 forward split performed last year those shares were turned into over 26 million.

After such a massive drop APSI could definitely bounce but the risks around the stock remain significant. Tread carefully and commit to trades only after doing extensive due diligence.