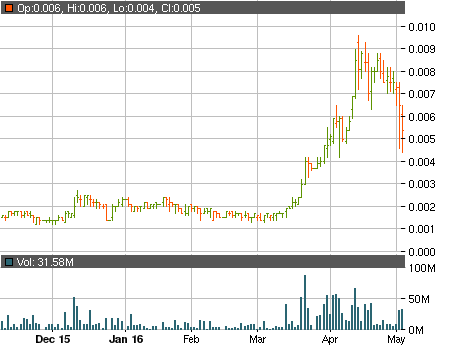 On Tuesday Advanced Medical Isotope Corp. (OTCMKTS:ADMD) crashed hard wiping over 10% of their value but during yesterday’s trading things actually got even worse. The stock slashed an even bigger portion of its price sitting nearly 17% in the red at $0.0054 by the time of the closing bell. At least for now the company is still far from the price levels from the start of March when it was trading at around $0.0015 but if the downtrend continues it could soon find itself right back down there.

Doing even cursory due diligence on ADMD reveals a staggering amount of rather serious red flags. Let’s start with the fact that the OTCMarkets profile page of the company carries the OTC Pink Limited Information sign as a result of ADMD‘s annual report for 2015 still not being filed. This means that investors have to rely on the report covering the quarter ended September 30, 2015, if they want to get any financial information about the company. And opening said report is definitely not going to get anyone excited:

if the balance sheet simply wasn’t depressing enough let’s remind you that last year the company maxed out its authorized amount of common shares but that didn’t stop the conversions of debt – ADMD began using their Series A preferred shares, each of which can be converted into 1000 thousand common shares. Last year close to a million preferred A shares came into existence as a conversion of $5.93 million in debt while more recently 75,546 preferred A shares were issued in exchange for a promissory note with an outstanding balance of $1.1 million. While for now there is no room for the preferred shares to be converted that may change rather quickly – at any time prior to October 15, 2016, ADMD can perform a reverse split at a ratio between 1-for100 and 1-for-300.

ADMD have stated their plans to enter the veterinary oncology market, even forming a new subsidiary, IsoPet Solutions Corporations, while in the third or fourth quarter of the year they will try to submit a new de novo application with the FDA for their Y-90 RadioGel device. It is up to you to decide if this will be enough to offset the numerous red flags.