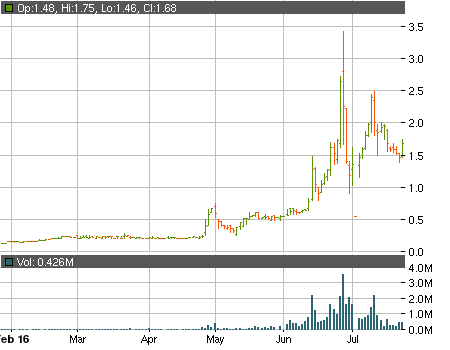 Valmie Resources Inc (OTCMKTS:VMRI) has had a pretty decent run in the past couple of months. The ticker started the year rather slow and was hovering below the 25 cent per share mark for quite some time, while the daily volumes remained relatively low.

As VMRI began to climb, however, we saw the volumes increase as well. The company stock quickly reached high price levels and the market valuation reached around $160 million at its peak. This was rather strange when you consider the underlying financials of the company. It recently filed its report for the quarterly period ended May 31, which contained the following numbers.

Those numbers are far from great, but they didn’t seem to bother investors hyped up by VMRI. This becomes even stranger when you consider the fact that VMRI bares the black, skull and crossbones caveat emptor sign in the OTC marketplace website.

This is why the latest decline in the price of the company stock came as no surprise. VMRI, however, is still issuing optimistic press releases that seem to be working. After yesterday’s PR we saw the ticker rise 14.29% up the charts and close at $1.68, while a total of 426 thousand traded shares generated $694 thousand in daily dollar volume.

VMRI is still going up the charts in today’s trading, but that doesn’t mean that you should skip doing your due diligence and weighing out the risks before putting any money on the line.