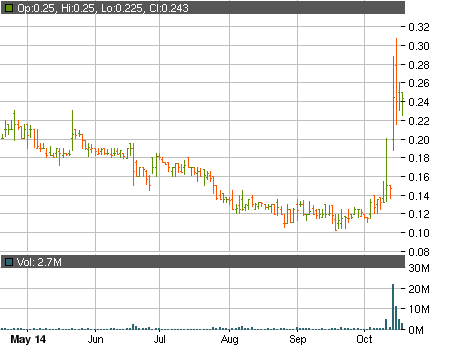 It’s been almost a week since Aethlon Medical, Inc. (OTCMKTS:AEMD) announced that physicians at the Frankfurt University Hospital are using their Hemopurifier in an attempt to prevent the spread of the virus and boost the immune system of a Ugandan doctor who has contracted Ebola. As you probably know, the deadly disease is one of the hottest topics on the stock markets and, not surprisingly, the news had a major effect on AEMD‘s performance.

In a matter of just six and a half hours the ticker managed to gain as much as 66% and it even hit a 52-week high of more than $0.30 per share. Investors were extremely excited about the application of the blood filtration device and it wasn’t long before some outfits and newsletters were also jumping up and down and waving their arms about. Small Cap Stock Plays (who disclosed a $16 thousand compensation) sent out an email and Zacks Small Cap Research wrote an article on AEMD. The general notion that the two outfits wanted to convey is that the use of AEMD‘s Hemopurifier in the battle against Ebola could open up numerous opportunities for the company.

We don’t say this too often on these pages, but they seem to be right. The current outbreak of the deadly virus is the largest ever recorded and according to various reports, the death toll has exceeded 4,000. The number of people contracting the disease is growing by the day and the whole world needs to find a way of overcoming the problem. There’s little doubt in anyone’s mind that if a small company like AEMD manages to help in some way, it’s going to attract quite a lot of attention to itself.

So, in that respect, the people who jumped in on the bandwagon and touted AEMD‘s stock immediately after the Ebola press release were right. What they didn’t tell you, however, is what will happen if the Hemopurifier proves to be ineffective in containing the virus. And the answer is that it probably won’t be pretty.

If you read through the press release carefully, you’ll see that the results from the treatment aren’t in yet. The company announced that they will put them online as soon as they have them and some people were trying to convince investors that the news will come out on Friday. Surprisingly or not, this didn’t happen which means that the people who jumped in last week aren’t left with a whole lot of options. In fact, all they can do is sit and hope for some positive words from Frankfurt.

In the meantime, however, they shouldn’t forget that the hype around the Ebola announcement was quite a lot and it might have pushed the stock out of its comfort zone. After all, levels of over $0.20 per share hadn’t been observed for nearly five months before last week’s press release and judging by early trading today, the stock might be caving in under the pressure. About twenty-five minutes after the opening bell, AEMD is sitting at just over $0.20 which is a hefty 15% below Friday’s close.

The uncertainty around the future of the Hemopurifier as a treatment of Ebola and the problems that we listed in some of our previous articles makes a potential investment extremely risky. We reckon that considering all the underwater stones before putting any money on the line is absolutely essential.