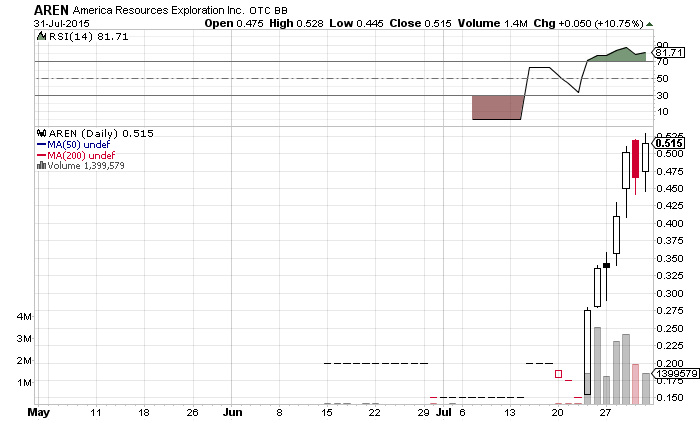 It seems the precarious chart ride of America Resources Exploration Inc (OTCMKTS:AREN) is not over yet. Following a stumble on Thursday, the last market session saw AREN climb again and stop 10% up at $0.51 per share by the bell.

AREN was previously namedAlazzio Entertainment Corp but switched names and course of business in April 2015. It was only recently that the ticker launched into active trading and this happened with a bang. As we stated in our previous articles on AREN, the onset of the stock price movement looked very much like a pump job, though so far we have not been able to find any landing web pages or solid evidence of a paper mailer in circulation -the two major ways to run a high-profile stock pump.

That is not to say that traders don’t have plenty of things to look out for with AREN. Those start cropping up as soon as one takes a look at the company’s latest financial report. Here is what AREN had to show as of its latest 10-K for the year ended March 2015:

Those figures are enough of a hair-raiser on their own. Adding to this the fact that the company is listing a virtual office as its registered headquarters address and that AREN sold 1,000,000 shares at $0.15 apiece just a couple of weeks ago don’t do much to help investor confidence, especially at the current market prices of over half a dollar.

Back when AREN was Alazzio and its business plan was to build a photo booth rental business, the company sold 35 million shares through a public offering (number adjusted for the 15 for 1 forward split in April 2015) for proceeds of $23,519 setting the share price at $0.0006.

AREN has been heavily overbought for a number of days in a row now.