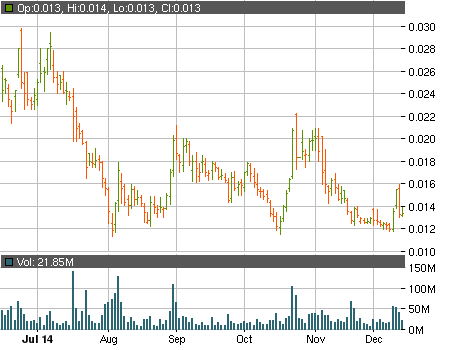 Despite the best efforts of American Green, Inc. (OTCMKTS:ERBB) to persuade everyone that everything is on track with the company’s legendary ZaZZZ vending machine, the simple fact of the matter is the machine is simply not out yet. With early December now in the past, it looks like ERBB managed to miss yet another deadline for shipping the ZaZZZ Mach 2 to its alleged customers.

With Christmas coming next week, it’s now mostly safe to assume that ERBB will miss its bold target of 1000 machines deployed by Dec 25 that the company voiced in early 2014. The Mach 2 was only teased in a couple of Instagram photos that have since been taken down. The company’s Facebook page stated that orders for the Mach 2 were scheduled to ship out to customers in ‘early December’. Judging by the lack of news, it would seem this did not happen, again.

The original launch date for the ZaZZZ was back in June. Since then it’s been six long months of promises of upgrades, improvements and tweaks, new patents and technologies, with little to show for it. ERBB could have spared its investors the anticipation and could have opted not to announce any further launch dates past the original June 12 launch that fell through. However, you don’t keep people hyped up about your stock by keeping quiet, so ERBB decided to set a few more launch dates for itself and managed to miss all of those.

The company came up with more PR on Friday but it was largely more static in the stream, as this is the umpteenth time investors have to read about a new and exciting deal that will enhance the capabilities to leverage the ZaZZZ, which doesn’t mean a lot if there is still no ZaZZZ out.

On the upside, the company’s social media pages get updated with articles about President John F. Kennedy having smoked pot in the white house to alleviate his medical conditions – information of the utmost importance to shareholders and potential investors. It remains to be seen when a PR concerning the launch of the ZaZZZ Mach 2 will hit the wire.