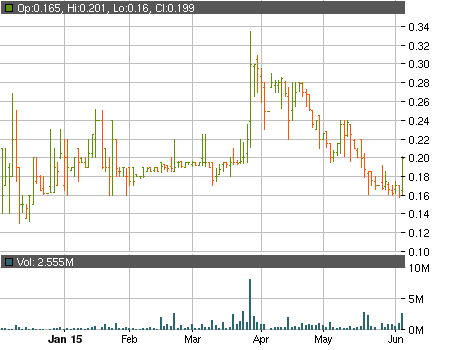 Since late-April the stock of Ampliphi Biosciences Inc (OTCMKTS:APHB) has been going down the chart with the sessions ending in red far surpassing the green ones. As a result the ticker slid from $0.28 to a low of $0.158 per share. Yesterday, however, investors rushed towards the company and the increased buying pressure pushed APHB over 24% higher to a close at $0.199. The 2.5 million shares that changed hands during the session surpassed the 30-day average of the company by nearly 4 times.

Early in the morning APHB issued a new PR announcing that their production facility in Ljubljana, Slovenia, was cleared to manufacture bacteriophages under current Good Manufacturing Practices (cGMP) standards. The certification will allow the company to supply drug candidates for their upcoming clinical trials. The company plans to commence clinical trials of its lead drug, AmpliPhage-002, for treating multi-drug resistant strains of Staphylococcus aureus at the Walter Reed Clinical Trial Center in the second half of 2015.

Unlike many of the other pennystock biotechnology companies APHB has enough resources to fund its currently planned operations. After completing a $13 million financing in March the company finished the first quarter of the year with:

Ampliphi believes that its strengthened balance sheet is another step on the road to uplisting to a national exchange. Leaving the OTC Market and moving to a higher exchange is going to be extremely beneficial for APHB but investors should keep in mind that in order to align the share price with the minimum bid requirements of either the NASDAQ or the NYSE a reverse split has been authorized. The split should be implemented by the end of the month at a ratio between 5-for-1 and 50-for-1. If the reverse split is not performed within that period a vote will be held during the shareholder meeting on June 30 to extend the deadline to June 30, 2016.

For now APHB should remain a volatile choice for investment. Although the reverse split has an admirable purpose some investors might be worried about the company’s ability to sustain its increased post-split share price.