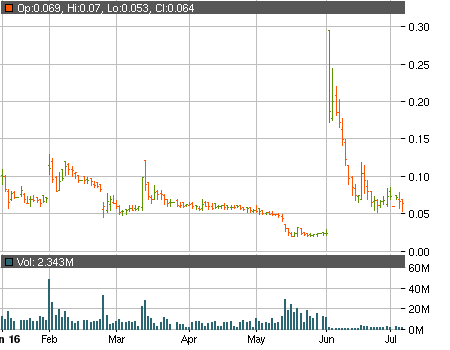 For the past three sessions the stock of Ascent Solar Technologies, Inc (OTCMKTS:ASTI) has been falling down the chart once again. Yesterday the ticker wiped another 5.2% of its value for a close at $0.0635. The stock was sitting much lower at $0.054 just minutes before the closing bell but managed to avoid an even scarier loss thanks to a last minute jump. Will the company reverse its downwards direction during today’s trading?

Well, all of the red flags surrounding ASTI are still as serious as ever while at the same time there have been no new PRs or filings that could reinvigorate investors. In fact, the last press release came at the end of June and simply stated that 20 days had passed since the reverse split and that the company can now return to trading under its “ASTI” symbol.

The reverse split at a ratio of 1-for-20 that became effective at the start of last month may have reduced the outstanding shares of the company to around 17 million but it had no effect on the authorized amount of 450 million shares. This leaves plenty of room for the continued dilution of the common stock. And the issuance of fresh shares is not that unlikely – just take a look at the last two securities purchase agreements of the company.

Back in April ASTI entered into an agreement for the sale of $2 million of a newly designated series G Convertible Preferred stock that has a fixed conversion price of $0.05. Even with the massive losses in share price following the reverse split ASTI‘s stock is still trading above this conversion price. On June 9, however, another private placement took place – this time the company decided to raise $2.5 million through yet another newly designated preferred stock. The Series H shares that are going to be sold under this agreement can be converted into common shares at a 30% discount that could grow to 40% in the occurrence of certain “Triggering Events”.

Before committing to any trades involving the stock of the company you should take the necessary time to do your own due diligence. ASTI‘s financial results for the second quarter of the year, if they are positive enough, could be able to change the current negative sentiment towards the company but for now the stock could continue to suffer corrections.