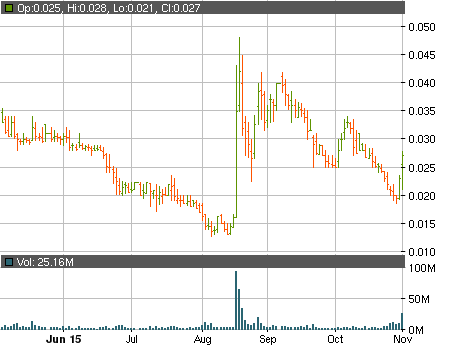 Last Friday Cannabis Science Inc (OTCMKTS:CBIS) finally put an end to their prolonged slide down the chart with the company finishing the session 18% in the green at $0.023. An undoubtedly impressive performance but could the momentum survive the weekend?

Yesterday CBIS opened with a gap up at $0.0255 but despite the encouraging chart the trading day turned out to be far from a smooth sail for the ticker. The stock fluctuated significantly surging up to a high of $0.0277 just to fall immediately back down to a low of $0.021. Still, a strong rally in the minutes leading up to the closing bell allowed CBIS to finish the day at $0.027 for a gain of more than 17%. Throughout the session more over 25 million shares changed hands, the biggest daily volume for CBIS since August.

The PR published by the company early in the morning certainly played its role in getting investors excited. In it CBIS announced that they are going to begin the drug development program with IGXBio Inc. The collaboration between the two companies was first announced at the end of May. At least now investors know that despite establishing the drug program several months ago now CBIS have decided that it is time to accelerate it. Keep in mind however that the company’s CS-TATI1 drug candidate is still in preclinical development.

Since the start of the year CBIS have been talking about launching new products in Europe and California on several occasions but so far they have failed to produce any meaningful results. This can be clearly seen in the latest financial report that covers the quarter ended June 30. Back then CBIS had:

For the entire 2014 CBIS generated exactly $1031 in revenues while for the first half of 2015 they haven’t been able to do even that – by June 30 the company had failed to get even a dime in revenues. At the same time the net loss for the quarter covered by the report stood at over $6 million compared to a net loss of $1.56 million for the same period last year.

Investors have to also take into account the continued dilution of the common stock. As of October 8 CBIS had 1.3 BILLION outstanding shares. At the start of September the company decided to increase its authorized shares from 1.5 billion to 3 billion so now there is plenty of room for even more shares to see the light of day. A considerable portion of the issued shares have been given to insiders of the company as bonuses and awards despite the dismal state of the company.

With investors waiting to finally receive the dividend that was promised over 4 years ago and the new dividend announced by CBIS the stock could continue to see heightened trading for now. Especially if the company keeps the stream of PRs going at the same rate. Without any visible progress however the red flags could once again start to depress the stock. That is why you should approach the ticker with caution committing to trades only after doing your own due diligence.