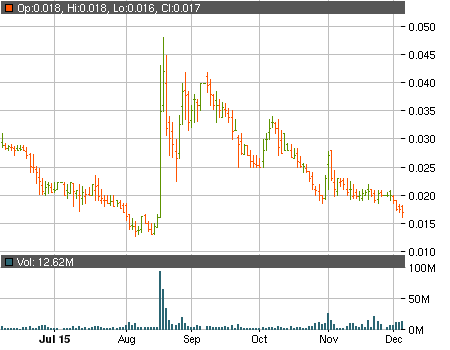 So far Cannabis Science Inc (OTCMKTS:CBIS) has registered four consecutive sessions ending in the red. Although the daily losses have not been that alarming they were enough to bring the stock to its lowest point for the past four months. Last Friday CBIS sank to an intraday low of $0.016 but they managed to close a bit higher at $0.017. Will the downtrend continue when the market opens today?

Well, as we have been warning you CBIS has been having quite a lot of troubles delivering on its promises. Investors are still waiting for the promised dividends – keep in mind that one of the dividends was first filed with the SEC nearly four years ago on August 18, 2011. More recently the company stated that by December 1 a new website for its cannabinoid-infused animal care products should be launched. Nearly a week after that date there have been no PRs about the website.

Meanwhile insiders of the company seem to have once again started to sell their shares on the open market. A Form 4 filed on December 3 revealed that the COO of CBIS, Mr. Chad Steven Johnson sold close to 2 million shares last Tuesday and Wednesday. Despite the lack of any meaningful results from its operations CBIS has been issuing millions upon millions of shares as bonuses and compensations under its various stock compensation plans.

But let’s move on to the latest financial report filed by the company. It covers the third quarter of the year and according to it at the end of September CBIS had:

As of November 20 the outstanding shares of the company had surpassed 1.4 BILLION, up from the 1 billion shares outstanding at the end of last year. With the recently increased authorized amount of 3 BILLION shares there is plenty of room for the issuance of more shares.

At the end of last month the company finally announced the launch of its cannabinoid-formulated capsule product line in California. As you can see from the chart the announcement had little effect on the performance of the ticker. And without any tangible results shown by the company its stock could continue to slowly slide further down the chart.