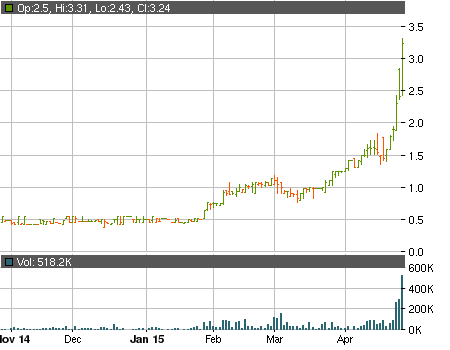 Yesterday marked another amazing session for Celsius Holdings, Inc. (OTCMKTS:CELH). The stock powered through the day with a gap up and a further spike to above $3.00 in the morning hours. By the closing bell CELH had shifted its heaviest daily volume in years and had gone another 34% up, to stop at $3.24 per share.

The company was traded on the NASDAQ until it ran into non-compliance hurdles. The first notice was received in late 2010 and concerned minimum shareholder equity requirements of the exchange. By late December 2010 the company announced its voluntary withdrawal from the NASDAQ and proceeded to trade on the OTC marketplace.

The company is famous for its beverages that are not simply zero-calories, but are actually advertised as “negative calorie”, in the sense that they help you burn fat. Here is what CELH published as of its last report for fiscal 2014:

The company’s latest press release dropped a week ago and announced a $15.9 million investment led by China-based Horizons Ventures, as well as music industry icon Russel Simmons and his former spouse, Kimora Lee Simmons. The news is no doubt a very big part of the reason why CELH climbed over 100% within the space of five sessions.

This relentless climb has pushed the stock very deep into overbought territory. As a matter of fact it has been there for a few sessions now and a reversal into more normal trading ranges is not unlikely, as this sort of spike within such a short time is next to impossible to sustain.