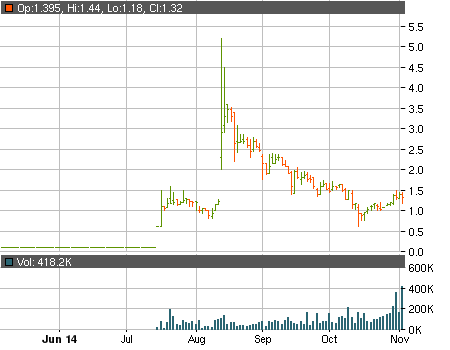 Changing Technologies Inc (OTCBB:CHGT) slipped by about 5% yesterday and closed the session at $1.32 per share on a dollar volume of more than $536 thousand. The current share price is a whopping 74% below the 52-week high of $5.20, but it still means that, theoretically speaking, if you want to buy 100% of the issued and outstanding stock, you’ll need to set aside around $80 million. So, what will you get for this sort of money?

You’ll get a company that doesn’t appear to know where its corporate headquarters is. On the one hand, if you take a look at the first page of the latest 10-K, you’d be forgiven for thinking that it’s located in a virtual office in Houston, Texas. Scroll a bit further down, however, and you’ll read that CHGT works out of a residential house in Estero, Florida.

For $80 million you can also get a company that seized to be a shell just over three months ago. An acquisition of a private entity called SumLin Technologies, LLC was completed on July 25 and immediately after that, CHGT officially entered the 3-D printing industry. Unfortunately, the only thing they’ve been printing so far is press releases. Ones of the fluffy variety, at that.

The number of articles that have popped up on the company profile at Yahoo! Finance is absolutely astonishing and the only thing more shocking than that is the complete lack of any information that might be relevant to CHGT or their shareholders. On Monday, for example, they tried to imply that somehow, Hewlett-Packard Company (NYSE:HPQ)’s venture into the 3-D printing industry will help CHGT get their business off the ground.

This seems somewhat unlikely considering the figures found in the latest financial report. According to it, on June 30, this $80 million company had (the numbers are NOT in thousands):

In light of all the facts and figures above, some investors might think that they are paying a bit too much for CHGT at the moment. They should probably know that not that long ago, other people had the opportunity to take a position in the company at much lower prices.

That, in case you’re wondering, represents 25% of the total issued and outstanding shares and according to CHGT‘s profile at the OTC Markets, it also represents 100% of the float. Make sure you bear this in mind while making your investment decision.