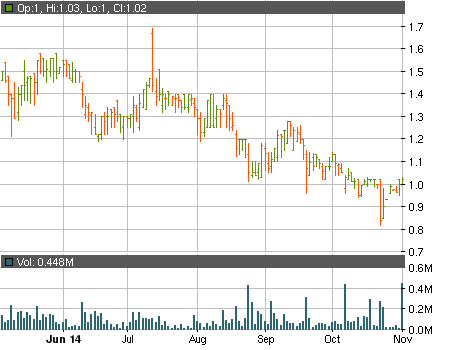 If you have a look through Chromadex Corp (OTCMKTS:CDXC)’s SEC filings, you’ll see that back in August some members of the management team spent quite a lot of money buying shares on the open market at prices ranging from $1.09 to $1.20 a piece. They probably weren’t ecstatic when they saw the stock drop below the $1 per share mark for the first time since November 2013.

This happened a couple of weeks ago and although the ticker has managed to recover some of the lost ground since then, its overall performance is far from impressive. It would appear that CDXC simply can’t draw enough attention to itself which means that volumes are small and inconsistent and the price movement (when present) is negligible.

Yesterday, for example, the company published a new presentation on its OTC Markets profile which is supposed to draw some investors in. Yet, while it did manage to generate around $450 thousand in dollar volume, CDXC failed to make a strong jump and it finished the day at $1.02 per share, only 2% in the green.

Even when the announcements are more significant than a simple investor presentation, the ticker is still proving to be frustratingly reluctant to put smiles on investors’ faces. And that’s somewhat unusual for a penny stock. We decided to see if we can find the reason for CDXC‘s strange behavior.

One of the first things you should do when researching an OTC company is to make sure that there are no paid promotions. Once you take a look at our database, you’ll see that the ticker hasn’t been pumped for more than two and a half years. Red Chip Companies, which is an IR firm, does appear to be raising awareness every now and then, but there are no signs of the typical paid pump that many penny stocks fall victim to.

Although promotions can draw attention to a company, they usually end up inflating the share price to unsustainable heights and the consequences of this are sometimes quite devastating. In that respect, the lack of any paid pumps is a good thing and it’s not something that could deter investors away from CDXC.

But if it isn’t the paid pumpers, then what could be the reason for investors’ reluctance to trade the stock? Does it have something to do with the company’s financial situation?

That doesn’t appear to be the case. We’ve covered CDXC a fair few times on these pages and we’ve always said that it is one of the more solid entities on the OTC Markets. It should be noted that the reports aren’t perfect. Profitability, for example, is still nowhere in sight, but even so, tickers with much bigger problems get a lot more attention from investors. Yet, somehow, CDXC doesn’t.

All in all, the reasons behind CDXC‘s unusual and strange performance remain a mystery and nobody can say for sure whether this is about to change or not. But does that mean that you should stay away from the stock? Or is it a sign that you should jump in before everyone else?

It’s up to you to decide. Just make sure you research the company carefully and evaluate all the risks before putting any money on the line.