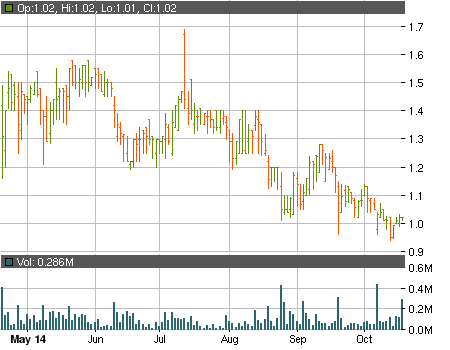 On Friday the OTC market was plagued by technical issues so severe that FINRA decided to suspend it from trading altogether for around 2 hours. Despite the limited trading session though investors were still able to shift nearly 300 thousand ChromaDex Inc. (OTCMKTS:CDXC) shares surpassing the average for the company by 3 times. The increased attention did not result in a corresponding increase in share price and the stock closed at $1.02, the same price it had at the start of the session.

Back in May CDXC was trading at around dollar and a half but currently it has been struggling to remain above the dollar mark. At the start of the month a new product featuring ChromaDex’s ingredient NIAGEN was launched but the news caused a one-day spike in price which was immediately followed by a downward slide.

Although the chart performance of the company has been far from encouraging their fundamentals remain solid. According to the latest quarterly report at the end of June 28 they had:

CDXC is among the few pennystocks that can boast a respectable cash reserves and a positive working capital. Not to mention the fact that the company is not reliant on toxic funding and as a result only 2 million shares have seen the light of day between December 28, 2013 and August 11, 2014 bringing the outstanding shares to 106 million.

At the end of last month they further strengthened their balance sheet by entering into a $5 million loan and security agreement with Hercules Technology II, L.P. The terms of the agreement allow $1 million of the sum to be repaid as shares but the conversion price is set at $1.293 which is significantly higher than the current market price.

Despite all the positive signs CDXC still has some weakness that it needs to address. Revenues have indeed been growing but the same can be said for the losses. Net loss for the first half of the year amounted to $3.5 million while for the same period last year it stood at around $2.45 million.

Interest in the stock has also been rather low with most sessions seeing less than a 100 thousand traded shares.

As a whole CDXC have been displaying a rather incosistent chart behavior and should be approached with caution. Do your own due diligence before making a decision in order to minimize the chances of any unpleasant surprises.