COASTAL INTGRTD SVCS (OTCMKTS:COLV) Bounces But Is It Too Late? 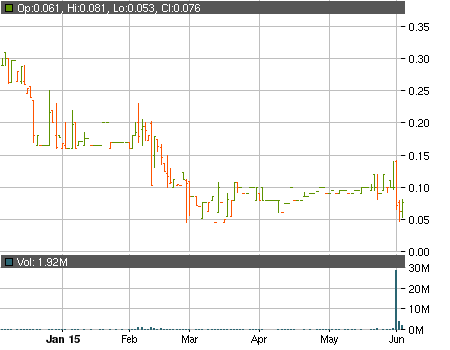 After crashing down for two consecutive sessions yesterday the stock of Coastal Intgrtd Svcs (OTCMKTS:COLV) managed to avoid a third close in the red. The ticker began moving upwards during the second half of the trading day and actually closed with a gain of 20% at $0.0759. Is this a sign that investors are changing their attitude towards the stock though?

Well, the entire volume for the session failed to surpass 2 million shares while on Monday, the first day COLV traded as a StockTips pump, over 28 million shares changed hands. The dollar volume decreased from the staggering $3.15 million on Monday to a little over $130 thousand for yesterday’s trading.

We will see if another email alert issued by StockTips, who disclosed a production budget of $4.5 million for the pump, will manage to help COLV recover more of its losses because even after yesterday’s gains the stock is sitting nearly 25% below its pre-pump price. Investors may also be reluctant to return to the promotion after the first two disastrous days.

Even on its own COLV seems surrounded by red flags. The latest financial report filed by the company shows some truly horrific numbers:

The almost non-existent financial resources of the company may force it to seek new external funds which in turn could result into more shares being issued as a conversion of debt. Last year COLV already had to issue over 52 million shares as a conversion of just $52,418 in debt. Each share was priced at $0.001, a massive discount from the current market price.

Although the volumes have fallen dramatically in just three sessions the owners of these shares could still dump them on the market for millions in profits.