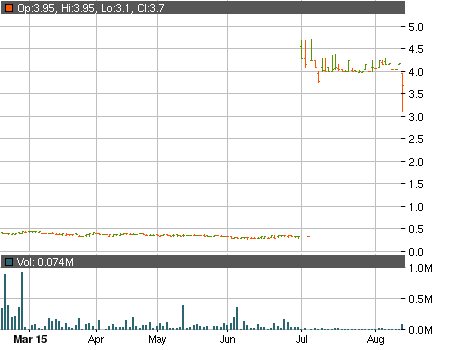 On Friday the stock of diaDexus, Inc. (OTCMKTS:DDXS) suffered a rather painful drop. The ticker opened at $3.95, which as it turned out was it highest price for the day, and quickly crashed to a low of $3.10. The company was able to bounce somewhat and by the time of the closing bell it was sitting at $3.69 for a loss of over 11%. The traded volume for the session of 77 thousand shares surpassed the monthly average for the stock by nearly 10 times.

The sudden plunge down the chart was caused by the financial results announced by DDXS after the end of Thursday’s trading. According to the quarterly report as of June 30 the company had:

So these are the numbers that investors found disappointing? It is true that the net loss is sizable but still nearly all of the other pennystock ventures can only dream of having such a balance sheet. The problem is that for DDXS the report raised some alarming concerns. The reported revenues decreased significantly both year-over-year and quarter–over-quarter. Compared to the same period last year the total revenues declined by 40% while the net loss grew from $441 thousand to over $3.3 million.

During the quarter DDXS’ sales of their PLAC ELISA test took a large hit due to the fact that the company’s largest customer, Health Diagnostics Laboratory (HDL), filed for bankruptcy back in June. HDL will continue to place orders with DDXS but they will be on a cash-in-advance basis. This event forced Diadexus to rescind their revenue guidance for 2015.

Despite the problems caused by HDL’s bankruptcy filing DDXS are moving forward with their operations. The company entered into partnerships for their PLAC Activity test with Mayo Medical Laboratories and the University of Oklahoma. In the heart failure franchise of the company DDXS are planning to initiate discussion with the FDA for the ProADM ELISA in the fall of 2015 followed by a a 510(k) regulatory submission in early 2016. The ProADM point of care product has completed feasibility testing.

If everything goes according to plan DDXS will also attempt to move out of the pennystock market and uplist to the NASDAQ national exchange. In order to meet the minimum bid requirements a couple of months ago Diadexus performed a 1-for-15 reverse split that bumped their stock price up the chart and reduced their outstanding shares from 57 million to less than 4 million.

For now though the company could continue to experience the negative effects of having their largest client file for bankruptcy. That is why you should do your own due diligence before committing to any trades.