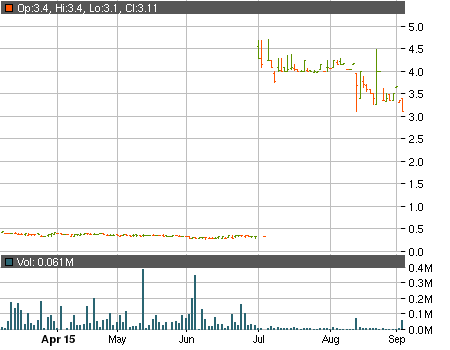 Yesterday the stock of diaDexus (OTCMKTS:DDXS) suffered another sizable correction closing at $3.11 for a loss of 7.44%. DDXS has been sliding downwards and if the trend continues the stock could register new lows. The amount of shares that changed hands during the day was 61 thousand while the monthly average stands at 6,600 shares.

On August 13 the company filed its latest quarterly report and according to it at the end of June DDXS had:

The balance sheet is definitely a rare sight in the world of pennystock – the company has sufficient cash reserves and generates millions in revenues. The lack of any toxic debt is another huge plus. So why is their stock falling down the chart?

Well, during the quarter covered by the report the biggest client of the company, Health Diagnostics Laboratory (HDL), filed for bankruptcy. This resulted in a drastic decrease in the sales of DDXS‘s PLAC Elisa test that was only partially offset by an increase in the sales of the PLAC Activity test. Compared to the same quarter last year the revenues declined by 40% while the net loss is over 7 times higher. Due to the bankruptcy of HDL diaDexus rescinded their revenue guidance for 2015.

The stock of the company could make a recovery though. This fall DDXS plans to initiate discussion with the FDA for the proADM Elisa while in early 2016 a 510(k) regulatory submission should be filed. The ProADM point of care product recently completed feasibility testing and the company is assembling development plans to commercialize this test. DDXS have stated that they are actively pursuing an uplisting to the NASDAQ national exchange even performing a 1-for-15 reverse split as a step towards this goal.

For now the company still faces some serious challenges and it remains to be seen if they will be able to cope with them. Do your own due diligence and set appropriate time horizons for your trades.