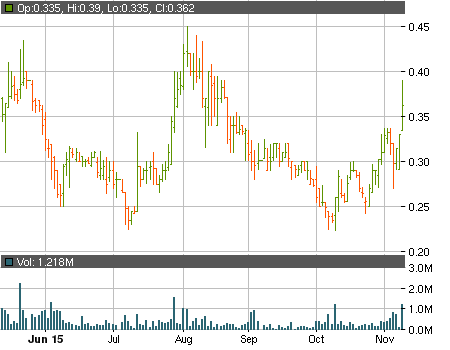 After the end of Monday’s trading Electronic Cigarettes Intl Group Ltd (OTCMKTS:ECIG) submitted its financial report for the third quarter of the year. The company also held a conference call during which it discussed its recent developments. It seems that investors were rather pleased with the announced numbers and yesterday the stock of the company continued to move higher up the chart registering a gain of nearly 10% and closing at $0.36 per share. Interest in the ticker rose significantly and more than 1.2 million shares changed hands, the last time ECIG saw such intense trading was way back in July.

We have often stated that ECIG is not one of the typical pennystock companies and yesterday’s report makes that rather obvious. The company finished the quarter ended September 30 with:

ECIG‘s revenues have continued to grow and the company reported a quarter-over-quarter increase of 28%. For the first nine months of 2015 the company has generated $38.5 million in net sales surpassing the $31.3 million for the same period last year. In the conference call the CEO expressed his believe that the company’s operations will continue to grow.

Earlier this year ECIG entered into a series of financing deals totaling approximately $47 million. They used the proceeds to deal with some of the preexisting convertible debt and to meet their current needs. By the end of September, however, their cash reserves had dwindled to $644 thousand. At the start of this month ECIG announced a new $18 million financing from their lead lender. According to yesterday’s PR they used some of the funds pay a portion of the company’s working capital line of credit, to settle $6.2 million of account payable for just $4.1 million, and to eliminate the remaining toxic debt.

It is clear that the company is moving past the troubles it had at the end of 2014 and early 2015. They still face a lot of problems though. The company will have to repay the money it borrowed in a couple of years while investors should keep in mind that there are hundreds of millions of warrants with an exercise price of $0.45. In addition ECIG also issued warrants for the purchase of 5.9 million shares at a much lower exercise price of $0.2087.