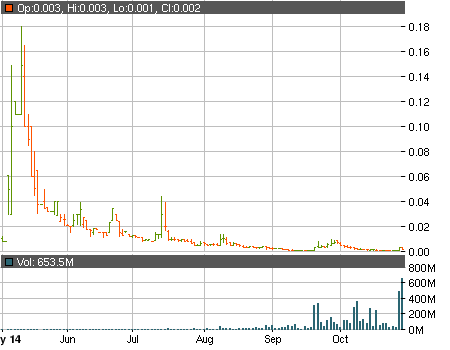 On Tuesday the stock of Elray Resources, Inc. (OTCCMKTS:ELRA) surged by 330% after the company issued a new somewhat fluff press release. In our article covering the impressive move we warned you to be extremely careful and it seems we were right – yesterday ELRA suffered a devastating crash wiping 57% of its value and returning to $0.0015 per share. The crushing slide happened on a massive selling volume of more than 653 million shares which brought the dollar value for the day to $1.42 million

Having in mind the serious red flags around the company it is perfectly understandable why investors were eager to cash in their holdings. First of all, ELRA was forced to do two reverse splits in less than two years. They were even going to do a third one on September 22 but in the end decided against it.

Despite the frequent reduction of the share structure the outstanding shares of the company have been ballooning out of control. Back in May ELRA had 5.6 million outstanding shares while as of October 3 there were 490 million outstanding shares. Yesterday another Schedule 13G was filed and according to it the O/S is now more than 580 million. This number seems rather suspicious though when as we already said the traded volume yesterday surpassed 650 million shares. The statement also revealed that Tarpon Bay have reached the restriction of 9.9% ownership of the company’s common stock despite still having $67 thousand left to convert.

The financial results of the company are far from enough to offset the crushing dilution. At the end of June ELRA could rely on the following:

Sitting deep into the double zero price ranges the stock can make sudden movements in either direction. The volatility certainly offers opportunities for quick gains but if you miss the right timing the losses could be devastating.

In early trading today the ticker plummeted down but was able to climb back up currently sitting at $0.0015 .