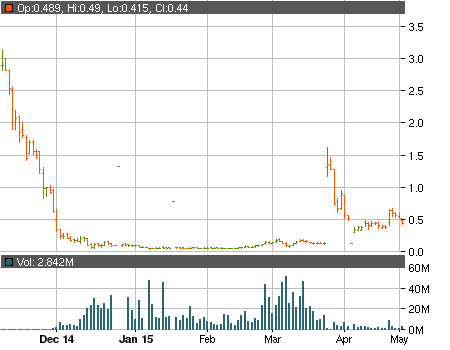 When last week Electronic Cigarettes Intl Group Ltd (OTCMKTS:ECIG) raised over $41 million in non-dilutive senior secured term loans the reaction from the market was both positive and immediate – on the day of the announcement the stock of the company skyrocketed up the chart by over 67% and closed at $0.635. The daily volume for the session reached the unprecedented 8.9 million shares.

All those who thought that the news would be enough to push the stock even higher up the chart turned out to be gravely mistaken. Starting from the very next session after the announcement ECIG have been going nowhere but down registering four consecutive sessions of losses and it seems that the corrections are only getting bigger. Yesterday the stock wiped close to 15% of its value and dropped down to a close at $0.44. So why are investors reluctant to put their money in the company despite the $41 million capital injection?

Well, if you have been following our articles about ECIG you should know that the company is going through a tough period. After their unsuccessful attempt to uplist to a national exchange the company began issuing massive amounts of discounted shares as a conversion of debt. The dilution reached such levels that it forced ECIG to perform a 15-for-1 reverse stock split at the end of March that decreased the outstanding shares to around 20 million. The issuance of shares continued even after the split though and exactly 1 month and four days later ECIG reported over 65.4 million outstanding shares.

In the PR about the $41 million financing ECIG stated that they have repurchased and retired the remaining subordinated convertible notes while also fixing the conversion price of the rest of the notes. The fact that the company is trying to stop or at least limit the future issuance of discounted shares is definitely a step in the right direction. Investors should note however that as part of the recent loan ECIG issued warrants for the purchase of 157 million shares with an exercise price of $0.45. If the share price moves above that number the owners of the warrants might decide to exercise them resulting in a significant increase of the outstanding shares.

Investors’ confidence in the company suffered another huge blow when ECIG filed their annual report for 2014. It is safe to say that the financial results contained within were severely disappointing:

The recent financing should help the company stabilize but it alone won’t be enough to convince investors to return. So far the chart performance of the ticker has been nothing short of depressing. Compared to its close at $1.38 on the day of the reverse split ECIG have lost nearly 70% of their value. Keep in mind that the next financial report that covers the first quarter of 2015 should be filed by May 15 and if it shows a similarly bleak picture ECIG could fall even further down.