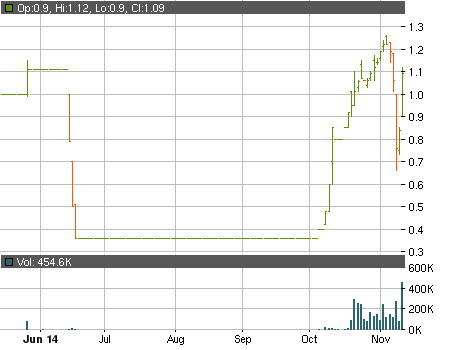 In just fifteen sessions the stock of Falconridge Oil Technologies Corp. (OTCMKTS:FROT) managed to run from 85 cents to a high of $1.26. The performance was more than impressive with only two sessions ending in the red. But this is the world of pennystocks and instead of being a natural reaction to a steady progress in the company’s operations the reason for the climb was a paid pump.

The promotion began with the creation of a landing page by the Moskowitz Report. The same entity that has been touting for months the stock of another company involved in the oil and gas industry – Virtus Oil and Gas Corp. (OTCBB:VOIL). In our previous articles we warned you that the artificial hype is pushing FROT to unrealistic price ranges and that a massive correction is not out of the question.

And indeed in three consecutive sessions the stock slashed nearly 40% of its price dropping down to a close at $0.76 at the end of Monday’s trading. Even after such a devastating display the pumpers were not ready to give up. A couple of email alerts were distributed among investors and it seems that they are having quite of an impact. Yesterday FROT recovered by close to 30%, broke through the $1 mark and closed at $1.09. Interest in the stock also reached record levels with 454 thousand shares changing hands.

Should investors expect a different outcome this time though? Well, nothing around the company has changed and all of the red flags are as serious as ever. As of yesterday their market cap stands at $53.4 million while their fundamentals are simply atrocious. The recently filed quarterly report revealed that FROT finished the period ending August 31 with just:

But the horrific financial state is not the only problem around the company. As of October 22 the number of outstanding shares is 49 million. 19.4 million of them (thanks to the 6-for-1 forward split performed at the end of 2010) are owned by a group of investors who paid a total of $65 thousand. At the current market price these people stand to gain millions.

It should be obvious that the only thing keeping FROT’s valuation is the paid pump. The volatility of the stock coupled with the numerous red flags demand the use of caution. Do your own due diligence and decide on appropriate time horizons of your trades in order to avoid any unpleasant surprises.