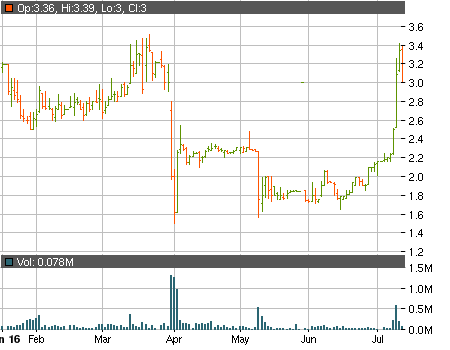 After taking some serious hits earlier this year we saw Global Power Equipment Group Inc (OTCMKTS:GLPW) begin to climb the charts in the second half of last month, regaining the value it had lost by the first couple of sessions of this week.

GLPW is another OTC entity that has been traded on a bigger national exchange. The ticker was listed on the NYSE marketplace until earlier this year, after failing to file its financial reports for 2015. This means that the latest information we have about the financial state of GLPW is from the report for the fiscal 2014.

Those are some pretty impressive numbers for an OTC marketplace listed entity and it would appear that GLPW looks underpriced with a market valuation of just over $50 million. This is why it was no surprise that the recent upward run almost went on without the aid of any press releases.

Investor excitement, however, seems to be over, as GLPW corrected and lost 10.18% of its value during yesterday’s session. As the ticker was headed for a close at $3.26 we saw a total of 77 thousand shares change their owners, generating $252 thousand in daily dollar volume.

The company is expected to file its reports for 2015 and the first quarter of this year by the end of September, so it will be some time until we get more current information on its financial state. In any case, be sure to do your due diligence and weigh out the risks before putting any money on the line.