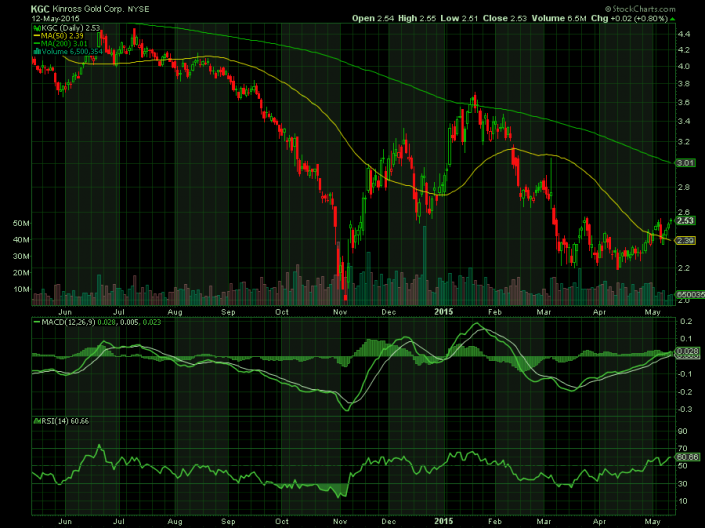 When Kinross Gold Corporation (NYSE:KGC) announced its Q1 2015 earnings last week, it got a lukewarm investor response on the charts. Hardly surprising when almost everything in this report is less than the corresponding first quarter of 2014. Gold prices, on the other hand, have gone fairly stale recently, thus further limiting industry-related businesses’ opportunities for chart growth.

The last few days of trade have had little impact to the stock price of Kinross Gold. Yesterday, KGC clocked in at $2.53 per share, up 0.80% from the day before, after 6.5 million shares changed hands throughout the session. Nevertheless, the company’s 30-day average trading volume remained close to the 10 million mark, which means that KGC remained among the top trading stocks at this price range.

Focused on the exploration and production of gold and by-product silver ore, the Canadian enterprise is one of the top gold producers in the world when it comes to publicly traded entities. Last year, KGC produced a record-breaking 2.71 million ounces from three continents and raked in cash reserves in excess of $1 billion. Yet, these figures didn’t prove sufficient to provide any returns to the 90 thousand KGC stockholders and the company still closed the fiscal year with a net loss of $1.20 billion.

On the one hand, KGC has the resources to produce real gold and it does produce ample quantities of gold. On the other hand, it has been incurring losses for years. Apparently, Kinross’s management is dealing with overwhelming production costs and the current gold prices are not high enough to cover them. Whether gold will rebound in the coming months depends on a lot of factors most of which are beyond the company’s power. What Kinross could do, however, is get a firm grip on its production costs and try to reduce them to a minimum.
The Q1 press release revealed a 2.5% improvement in this respect, i.e $709 $ per Au eq. oz., as well as a 3.7% reduction of all-in sustaining costs to $964 per gold equivalent ounce sold.

To ensure an accelerated growth on the charts, however, Kinross will have to quicken the pace by exploring for low-cost production opportunities. The recently announced organic production initiatives including the would-be tailings reprocessing plant in KGC’s site in Paracatu, Brazil, could be a step in the right direction.