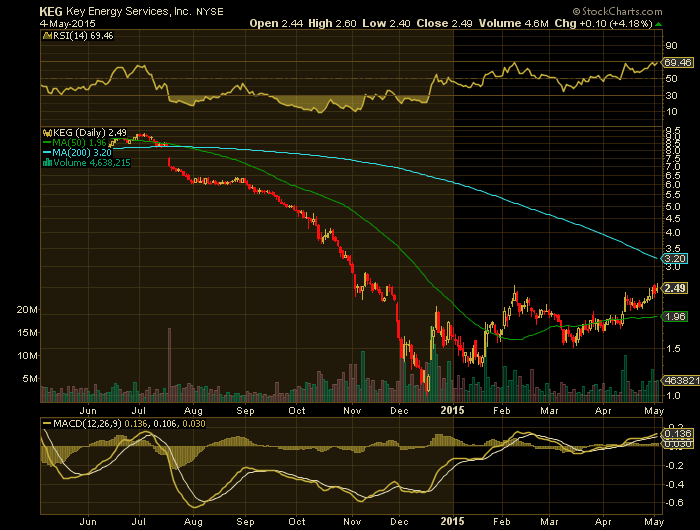 The recent slump in oil prices has inevitably dragged down the market value of hundreds of industry-related businesses and Key Energy Services, Inc. (NYSE:KEG), an oil rig servicing contractor, hardly makes an exception. A parallel between the chart performance of Brent crude oil, on the one hand, and Key Energy Services, on the other, reveals that while the former lost some 45% in 2014, the latter wiped a staggering 79% off the face of the earth for the same 12-month period. Now that the resurgence of the precious energy source is slowly morphing into a stable trend, KEG stock seems poised for a fairly interesting run on the charts.

KEG closed yesterday’s session at $2.49 per share, gaining a mere 4.18% on a volume in excess of 4.6 million. This move proved sufficient to send the stock to a new six-month high and bring its YTD appreciation to 50%. A few minutes into today’s session, KEG‘s ascent continues and the stock is currently traded above the $2.60 mark. In the light of the forthcoming annual stockholders meeting next week, the way KEG is climbing up on the charts seems to have come at the right time.

The latest 10-Q figures reveal cash reserves of $35.9 million, a 25% decline in revenue on an annual basis, as well as a net loss nearing the $60 million mark as opposed to a mere $12 million incurred in Q1 2014. Although KEG‘s quarterly revenue averages $350 million for the last four consecutive quarterly periods, it is still insufficient to cover the cost of revenue and  operating expenses. In this respect, the management’s decision to restructure its business operations by gradually disposing of its international endeavors could be seen as a move toward efficiency. If the revenue breakdown provided by the company is anything to go by, the bulk of the revenue (in excess of $120 million) comes from rig services rendered within the United States. At the same time, KEG‘s international division has raked in a modest $22.5 million, which correspond to a $9.6 million operating loss when you take all corresponding expenses into account.

Should Key’s BoD follow this logic, the coiled tubing services could be the next division to go.

Last year, KEG shares lost 79% in value. As a result thereof, CEO Richard J. Alario’s compensation clocked in at $2.73 million, or $1 million less than what he realized in 2013 when the stock gained 13%. In other words, the pay-for-performance incentive is at hand and so is the slowly stabilizing oil market. What this means to KEG‘s future behavior on the charts seems likely to attract some investor interest.