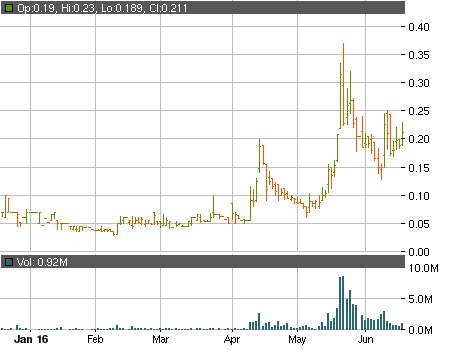 After sliding around the 5 cent per share mark for the first quarter of the year we saw the stock of Innovus Pharmaceuticals Inc (OTCMKTS:INNV) begin to climb the charts in April, but it quickly turned to a slide, wiping a large portion of the gains that it had made.

Still, the company began to ascent in May and reached new heights on increased volumes. The upward movement and the investor interest weren’t stopped by the mediocre numbers that INNV recorded in its report for the first quarter of the year.

Those numbers aren’t impressive and it was somewhat of a miracle that INNV managed to keep its upward momentum after the filing of the report. Still, the company did begin to correct rather quickly and entered this month sliding down the charts.

INNV did try to make a recovery and had showed impressive performance on June 9, gaining some 51.17% in value. Unfortunately, the surge was short-lived and the ticker came down the very next day. Since then it has been struggling to return to its upward direction and the regular press releases might certainly help with that.

Last week the company announced that it had eliminated more than $1.8 million in liabilities, which is always viewed as a good sign. The stock didn’t react, but another optimistic press release managed to provide for a green close of the week at $0.211, after an 11.53% gain.

INNV, however, is showing hesitation in the first minutes of today’s session so you should be sure to do your due diligence and weigh out the risks before putting any money on the line.