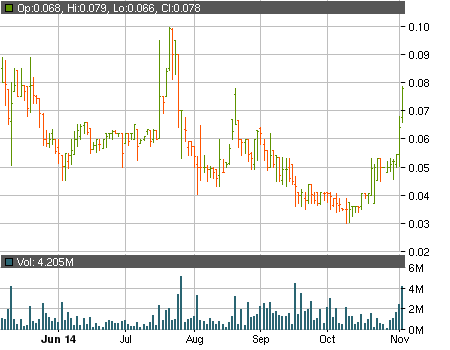 Not that long ago, the company that we now know as Praxsyn Corp (OTCMKTS:PXYN) was called PAWS Pet Company, Inc and once you take a look at the SEC filings, you’ll see that it wasn’t doing particularly well. At the end of the third quarter of last year, for example, they had just over $8 thousand in the bank, current liabilities of around $3.5 million, no revenue since inception, and a quarterly operating loss of about $440 thousand. The previous business plan was never going to work so at the beginning of 2014, they effectuated a reverse merger and acquired Mesa Pharmacy, LLC, a former subsidiary of a company called Pharmacy Development Corp. Now, things are quite a bit different.

During Q2 of 2014, for example, PXYN managed to log a whopping $23.2 million in sales and a gross profit of over $22 million. Without a shadow of a doubt, these are some impressive figures, especially when it comes to OTC companies, but the growth that PXYN‘s revenues have experienced is even more astonishing. The sales registered during the corresponding quarter of 2013 amounted to less than $500 thousand which represents a mind-bending 4,560% leap year over year.

All in all, when it comes to revenues, the company is definitely growing. Unfortunately, the same can’t be said about the stock.

The new ticker became effective two months ago, but instead of giving PXYN a push, it put quite a lot of pressure on it. Between September 5 and October 9, the stock lost more than a third of its value and dropped from just under $0.055 to less than $0.035. Now, though, it seems to be more determined than ever to climb to some more respectable levels. After five consecutive green sessions and a 20% jump yesterday, it’s sitting at just under $0.08. The reason?

The 10-Q covering the third quarter of 2014 should be out within the next ten days and judging by the hype and excitement around message boards, many people expect to see a positive bottom line in it. Despite the wobbly stock performance, they appear to be convinced that once profitability is reached, PXYN will become one of the more stable tickers on the OTC Markets.

Hopefully, this will be the case and hopefully, a positive bottom line is indeed within reach because, while the sales figures are impressive, the rest of PXYN‘s Q2 report is far from confidence-inspiring. Here’s a quick rundown of the most important financials:

As you can see, PXYN has its fair share of financial problems and although speculation is plentiful, nobody can be sure it it’s able to sort all of them out. Even the management team seems reluctant to comment on whether the company is getting closer to profitability or not.

Speaking of which, that might not be such a bad thing. A couple of years ago, Mesa Pharmacy was run by other people and they apparently made some statements that turned out to be misleading. As a result, the State of California Business, Consumer Services and Housing Agency issued a Desist and Refrain Order against the former management team.

Hopefully, the people that are currently at the helm won’t indulge in similar activities, but we reckon that bearing this embarrassing episode of the company’s history in mind might not be a bad call.

Another thing you should probably consider is the fact that according to the latest 10-Q, between December 31, 2013 and July 2014, PXYN printed a total of 49 million common shares as a conversion of preferred stock. If these shares hit the open market, the consequences could be quite dire.