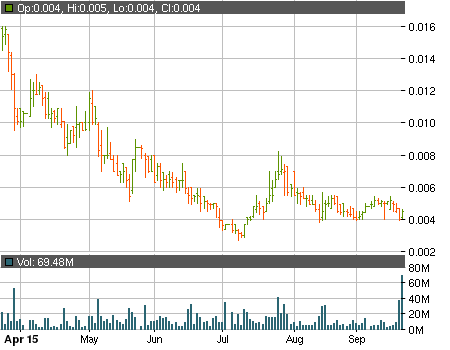 On Monday the stock of Baltia Air Lines Inc (OTCMKTS:BLTA) crashed hard wiping close to 15% of its value and closing the day at $0.004. The sizable loss seems to have spurred investors to rally behind the ticker and yesterday BLTA managed to bounce back up closing 12.5% in the green. Not only that but the trade volume for the day of 69 million shares nearly doubled the one from Monday. It is clear that BLTA‘s stock still has a lot of supporters but will yesterday’s spike turn into a more prolonged uptrend?

BLTA definitely has an appealing goal – becoming America’s newest airline. The problem, however, is that they have been trying to achieve it for years now and so far they have still not been certified to conduct any flights. At the same time the financials of the company have deteriorated drastically leaving BLTA in a rather depressing state – as of June 30 they had:

The accumulated deficit of the company has surpassed $115 million while the complete lack of any adequate current assets means that they might be forced to sell more common shares. This has been BLTA‘s main source of funds for quite a while and as you could probably imagine the dilution has been simply crushing. Just for the first half of the year nearly 900 million shares were printed. By July 29 another 200 million shares got issued. As of that date BLTA had 6.61 BILLION outstanding shares out of the 6.98 currently authorized.

The problems the company is facing don’t stop there though. For months BLTA has been trying to pass the mini evacuation test as part of their Phase III FAA Air Carrier Certification. After several attempts there have been no official PRs about the company being successful.

If Baltia finally overcome this hurdle and subsequently manage to complete their certification it could propel their stock up to new highs on the chart. The effects of the billions of shares that have been issued and the atrocious financials should not be underestimated though. Do your own research before putting any money on the line.