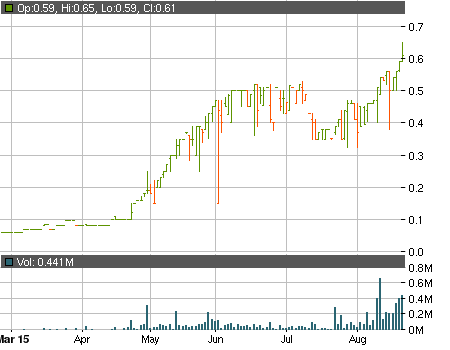 Last Friday the stock of Kimberley Parry Organics Corp (OTCMKTS:KPOC) continued to slowly ascend the chart and after gaining another 3.3% it is now sitting at $0.61 per share. During the session the ticker surged to a new record high of $0.65 but such prices proved to be too difficult to sustain. So far KPOC have registered four consecutive sessions of gains on above-average daily volumes but it may be for the best to approach their stock with a healthy dose of caution.

There is nothing immediately obvious that could explain the positive chart performance displayed by the stock. The last PR came on August 13 and it announced that the company had contracted the brand empowerment agency LandGrab. In one of our previous articles we already warned you that LandGrab has virtually no internet presence.

Furthermore KPOC’s financials seem to be completely disconnected from the current overly-inflated market cap of the company that is approaching $70 million. The latest financial report filed by KPOC covers the quarter ending February 28 and according to it back then they had:

By the end of the month the annual report should be submitted but if it doesn’t show a far better looking balance sheet KPOC may find it nearly impossible to justify their current share price.

Not to mention that for the past five years the company has performed three reverse splits. The latest one was a 1-for-8000 reverse split performed in April 2014. Less than two months after that a total of 152,876,900 shares valued at $0.0001 saw the light of day as a reduction of a note payable.

If you don’t already have an established position in the stock doing so at the current prices may be extremely risky. It is paramount to do your own due diligence before putting any money on the line.