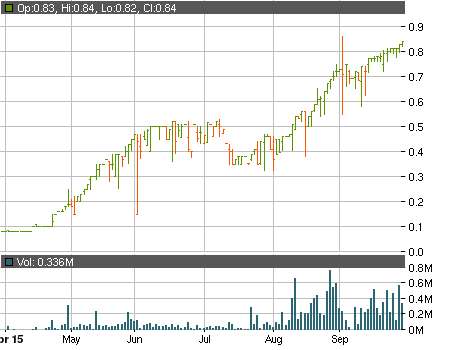 Early in the morning yesterday Kimberly Parry Organics Corp (OTCMKTS:KPOC) issued a new PR. Although it didn’t contain much details the press releases announced that KPOC have received a 12,500 unit order which should help them expand in the Asian Pacific. Despite the important announcement investors were far from excited and at the end of yesterday’s trading the stock was sitting just 1.2% in the green at $0.84.

In the case of KPOC, however, the lack of reaction to the PR is not the surprising fact. No, what is truly bewildering is why the stock is moving upwards in the first place. There is nothing about KPOC that could justify the ludicrous market cap of over $96 million that they currently command. And this should become obvious after just a brief glance at the recently filed annual report. As of May 31 KPOC had:

In light of these atrocious numbers the stock’s ascent from around 40 cents at the start of August to the current market prices seems completely out of place. Not to mention that the underwhelming results found in the report didn’t stop KPOC from paying $120,000 in “management salaries” and additional $249,120 in “payroll”.

And if you had somehow forgotten that KPOC is a pink sheet company the glaring discrepancies found in the report would have immediately reminded you. The company’s outstanding shares as of August 20 were 114 million. How is that possible when last year, just a couple of months after a massive 1-for-8000 reverse split, 152.8 million shares valued at $0.0001 per share were issued as a reduction of a note payable? Furthermore, in March this year 10.82 million shares were issued to repay a note in the amount of $10,820 plus accrued interest. This would mean that each share was priced at $0.001 but the report states that the shares were recorded at price of $0.05. Ultimately it doesn’t really matter because both prices are over 90% below yesterday’s closing price.

The inflated market cap, the horrific fundamentals, the lack of PRs talking about any financing deals, and the millions of underpriced shares turn KPOC into an extremely dangerous choice. If you are determined to trade the stock do extensive due diligence before putting any money on the line.