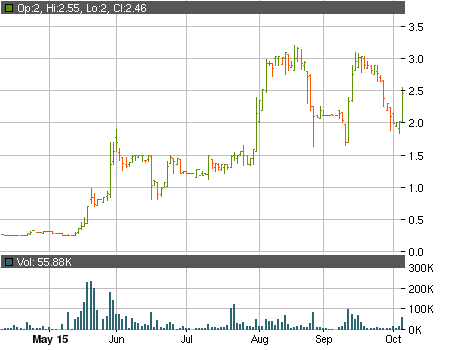 After sliding downwards for a couple of weeks Kirin International Holding Inc (OTCMKTS:KIRI) finally made a more profound move in the right direction during yesterday’s trading. The stock surged up the chart finishing the session with a massive gain of over 21% at $2.46. Although for a pennystock to trade at such price ranges is nothing short of an impressive achievement one might argue that KIRI should actually be sitting much higher.

After all the latest financial report filed by the company showed that at the end of June KIRI had:

With results such as these KIRI should be among the best pennystock ventures out there. Not to mention that back in May the company filed an application for an uplisting to the NASDAQ. Before you get too excited though let’s draw your attention to some rather important facts.

KIRI is a non-state-owned real estate development company that is headquartered in China where it conducts its operations. Despite its millions in revenues they have no official website. Well, unless you count http://www.cathaykylin.com/, which although carrying the same logo as KIRI is the site of an entity called Cathay Kylin International Investment Holding Group.

On September 10 KIRI announced that they had signed a memorandum of understanding for the acquisition of Wuhan Yangtze River Newport Logistics Center. As payment for the acquisition the company is going to issue 166 million shares valued at $10 each, price nearly 4 times higher than yesterday’s close. If the memorandum is executed the common stock of KIRI will be severely diluted – as of August 19 there were less than 20.6 million outstanding shares. To say the that the initial reaction towards the news was far from ecstatic would be an understatement because on the day of the PR the stock suffered a 17% crash.

Investors should not underestimate the volatility of KIRI‘s stock and any trades should be preceded by extensive research.