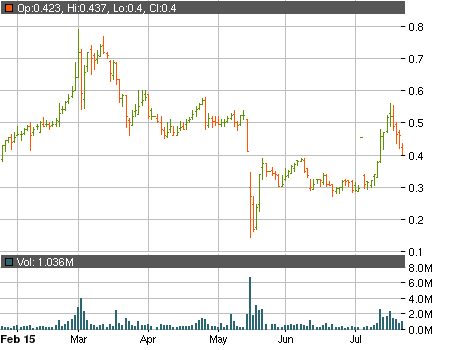 Yesterday the stock of Lifelogger Technologies Corp (OTCMKTS:LOGG) registered its fourth session ending in the red. When the closing bell rang the ticker had crashed to 40 cents per share for a loss of 13%. Compared to its high of $0.562 from last Thursday the company has wiped 40% of its value.

Despite the massive loss in valuation LOGG’s market cap of close to $33 million remains completely disconnected from the underlying fundamentals of the company. According to the latest financial report at the end of March LOGG had:

Even with the $150 thousand financial injection that was achieved through the sale of 348 thousand shares the balance sheet remains as grim as ever.

The lack of resources may be one of the reasons for the massive delays in the development of the company’s products. LOGG initially expected to have 100 working prototypes of its wearable camera by November 2014 with production slated to begin in the first quarter of 2015. Well, that didn’t happen. The corporate presentation from May 19 revealed that the final prototype of the camera is ready for testing but it didn’t specify any dates.

As for the cloud-based software platform the picture isn’t much different. According to the presentation private beta testing was supposed to begin by the end of the second quarter of the year but it seems that the deadline was once again pushed back. Not to mention that there have not been any official PRs coming from the company for close to 5 months now. In fact since the start of 2015 there have been only 2 PRs – one at the end of January and one at the start of March.

Without some new information about the progress of its operations to keep investors excited LOGG could continue to slide lower and lower down the chart. Keep in mind that the stock already demonstrated its ability to crash horribly when back in mid-May it dropped from 50 cents to less than 15 cents in just three days.