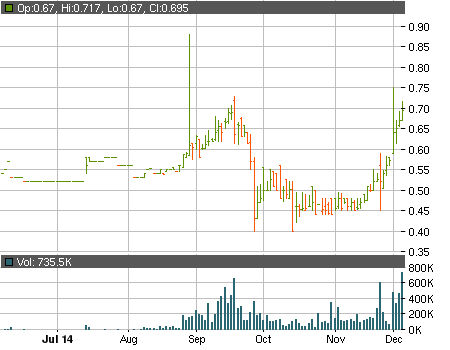 Lifelogger Technologies Corp (OTCMKTS:LOGG)’s performance from the last few weeks has been quite interesting. In fact, “interesting” probably isn’t the right word to describe it. “Impressive” seems more appropriate.

Yesterday, the ticker registered it’s seventh consecutive green session. LOGG added another 3.7% to its value and finished the day at $0.695 per share on a dollar volume of around $520 thousand. It would appear that the $0.70 mark is putting up a fight, but quite a lot of people reckon that if the volumes remain strong, breaking through it won’t be too much of a problem.

At first glance, the run in the right direction and the fact that a lot of investors are willing to put their money on the line aren’t really that shocking. For one, the wearable gadgets industry is white hot at the moment, and we’ve seen many major big board companies venture into it. LOGG‘s products look clever and some people are even drawing parallels between them and GoPro Inc (NASDAQ:GPRO)’s offerings. Apparently, they reckon that the small and affordable OTC enterprise could one day reach the heights of the action camera giant.

Another thing that draws investors’ attention towards LOGG comes from, believe it or not, The White House. You’ve probably heard about the riots and the unfortunate events in Ferguson, Missouri, and you probably know that right now, many people are desperately trying to find a way to prevent such things from happening in the future. President Obama reckons that strapping wearable cameras to policemen should do the job, and on Monday he called for a $75 million funding for this project.

LOGG‘s steep appreciation shows that there are people who truly believe that the small OTC company can somehow get a slice of the pie. This is not impossible, but it can only happen if LOGG are ready with their product, and unfortunately, the latest 10-Q shows that this is not the case.

They did register $90 thousand in revenues during the quarter ended September 30, but this amount came from conceptual design work under an agreement with an entity called Matrico Holdings Ltd. Of course, the investors who are jumping in right now have every right to hope that LOGG can get their cameras out in record time, but as we mentioned in some of our previous articles, there have been delays that put the whole thing under a rather big question mark.

The uncertainty around the future of LOGG‘s wearable cameras certainly raises the risks, but there is one more thing that puts investors into an even greater peril.

We are talking about the huge amount of discounted stock that saw the light of day back in 2013. As we mentioned in our very first article on the company, back then, some unnamed investors bought 3.1 million shares at just $0.01 a piece. In January the company (which was then in the process of changing its business plan) effectuated a 10 for 1 forward split which turned the 3.1 million shares into 31 million. And they were bought for just $31,000.

Some of the anonymous investors who bought those shares might still hold them and they might be tempted to unleash a large amount of them on the open market. Unfortunately, if that happens, the people who are jumping in right now could end up seriously burned.