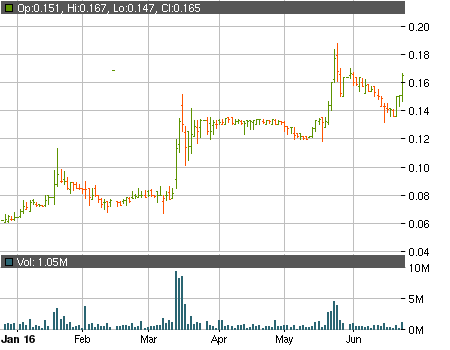 Liquidmetal Technologies Inc (OTCMKTS:LQMT) has been doing rather well since the beginning of the year. The company stock has managed to add value and keep it with long periods of moving sideways. After the latest upward run, however, LQMT entered into a small descent.

Still, the company stock has kept most of the gains that it made and there is a pretty good reason for that. Although LQMT commands a market cap of around $100 million, the company’s balance sheet is pretty decent compared to other OTC marketplace entities.

While LQMT has pretty solid cash reserves its liabilities shouldn’t be underestimated as well as the net loss that simply dwarfs the revenues that the company is generating. Still, with all that and lacking any new press releases from the beginning of the month we see that the company stock has begun to climb the charts.

First it gained 10.29% in Tuesday and stabilized. Then it added another 9.27% yesterday and closed at $0.165. The volumes were small and the 1.05 million shares that changed their owners managed to generate $170 thousand in daily trade value.

Unfortunately, it would appear that LQMT’s upward run has come to an end and the ticker is already 4.85% down the charts in today’s session. In any case, be sure to do your due diligence and weigh out the risks before putting any money on the line.