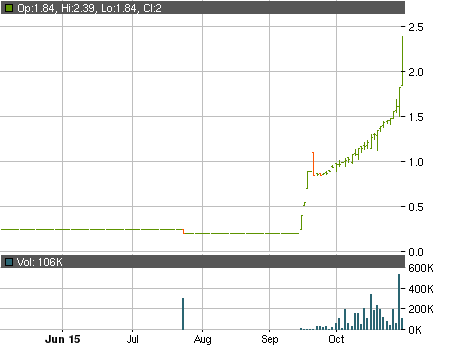 So far in the span of just a couple of weeks Marilynjean Interactive Inc (OTCMKTS:MJMI) have published three PRs updating investors about the progress of their operations. And judging by the chart performance of the company’s stock to say that the market has reacted favorably to the PRs would be an understatement – at the start of October MJMI were sitting at below a dollar while last Friday they closed at exactly $2 per share. Is such a valuation justified though?

We will let you decide for yourselves after discussing a few of the red flags surrounding MJMI. Let’s start with the last reported financial results. According to the quarterly report for the period ended June 30 back then the company had:

This means that a company with less than $6000 in cash, less than $8000 in current assets and zero revenues during the first half of 2015 currently commands a share price of $2 and has a market cap of over $346 million.

Maybe the PRs we mentioned earlier were so impressive that they could explain the extremely over-inflated price of MJMI? Let’s take a look then. First on October 12 it was announced that MJMI has entered into advanced discussions with a provider of Bitcoin-based remittance services primarily to the Philippines. Then, on October 21, the company entered into discussions with a firm that offers internet gambling licenses in the country of Antigua and offers connected data services located on a native reserve in Canada. And lastly, on Friday, MJMI stated that they are in discussions to acquire a share in an operating Bitcoin exchange.

In short, Marilynjean’s last reported financials are nothing short of abysmal, they have not announced any concrete agreements or even mentioned some useful details about their various “discussions”, and there are millions of underpriced shares that could bring millions in profits to their owners. Investors shouldn’t forget that back in 2012 as part of a unit offering 42,385,500 shares priced at $0.01 were issued. Even though around half of that amount was cancelled that still leaves over 21 million shares that could find their way to the open market.

Even the strongest supporters of the Bitcoin cryptocurrency must realize how dangerous trading MJMI is. Putting any money into the stock must be preceded by careful planning and extensive due diligence.