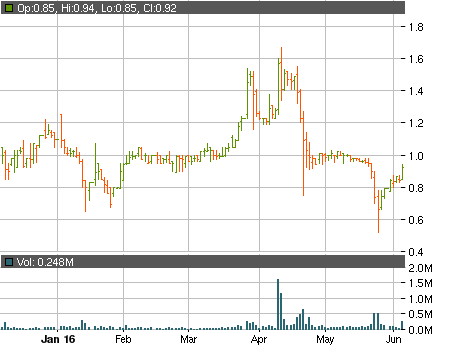 MassRoots Inc (OTCMKTS:MSRT) has suffered from a couple of blows in the last few months that took a serious toll on the company value. The latest hit was seen in the second half of last month when it was announced that the company’s application for an up-listing on the NASDAQ exchange has been denied.

The reasoning behind the negative decision was that MSRT’s business involved the distribution “of an illegal substance under Federal law”. The company tried to defend itself, blowing things out of proportion when it doesn’t even meet the financial requirements for a NASDAQ listing. Here is what MSRT had at the end of the first quarter of the year.

Those certainly don’t look like the numbers that you would expect from a company listed on a national exchange and they don’t even come close to covering the NASDAQ requirements. Still, the decision had a profound effect and pushed MSRT down over the course of three consecutive sessions.

The company was quick to begin recovering after a fluff PR was issued on May 26. The ticker has regained nearly all of the value it had previously lost. Yesterday’s 9.52% gain pushed it to a close at $0.92 while the 308 thousand shares that changed their owners generated $277 thousand in daily dollar volume.

MSRT is still going up today, but you shouldn’t forget that the current market cap of the company is quite big and is mainly maintained by the prospects of an up-listing rather than the book value of the company.