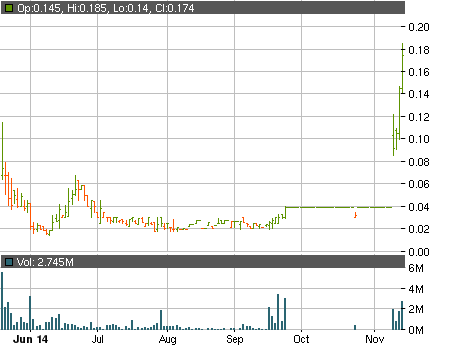 So far the month of November has been extremely positive for the stock of Nate’s Foods Co (OTCMKTS:NHMD). For the last ten sessions the company has only two sessions in the red. The overwhelming support shown by investors has resulted in new 52-highs to be registered almost daily. On Friday the stock continued its impressive performance and reached an intraday high of $0.185. Although it closed a bit lower at $0.174 it was still sitting 20% higher than the previous close.

The positive momentum has been so strong that even the rather depressing quarterly report covering the period ending August 31 was not able to break it. Back then the company had:

Despite the horrific numbers the stock dropped down only for a single day after which it immediately recovered. There is a valid reason why investors weren’t scared – NHMD has been able to address some of the more glaring weaknesses of their balance sheet.

On November 10 a $3 million purchase order financing was announced and it should keep them going for now. The PR didn’t reveal any specifics about the deal but at least it pointed out that the financing won’t result in any dilution. The lack of revenues might also come to an end soon with the company launching its first product – Nate’s Pancakes, last Saturday. Initially the product will be available only for online sale but during the first quarter of 2015 it should begin its grocery store placement.

NHMD has also announced that it is going to expand its product line with 10 new products in 2015. So far a one-minute omelet and guacamole in a can are under development.

With so much going on investors have certainly been enthusiastic about the future of the company, however, caution is still needed. The current chart performance has been largely facilitated through the issuance of numerous PRs. Since October 27 10 different press articles, outside of the SEC filings, have been published by the company. If the new PRs start to come out at a slower rate it could influence the share price negatively.

Investors should also consider the fact that there are millions of extremely cheap shares which were sold in the past. As we told you in our previous article you should take a look at Note-4 from this 10-Q report covering the third quarter of 2010. According to it 42 million shares were sold at $0.0008 while 6 million were issued at $0.00025. If any of those shares are sold at the current market price the people who own them could reap some rather hefty profits.

NHMD seem to be moving in the right direction and if they are able to execute their business plan the future does seem bright. The company still has some issues though and doing your own due diligence is as necessary as always.