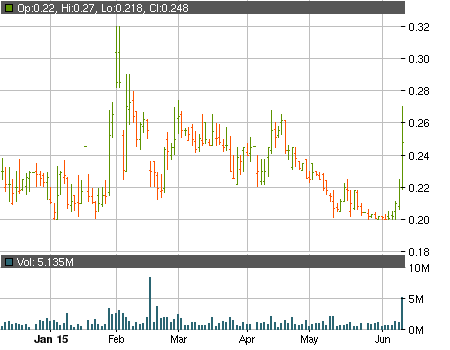 After nearly two months of silence Elite Pharmaceutical Inc (OTCMKTS:ELTP) issued a new press article yesterday and it definitely reinvigorated investors’ interest in the company. The stock opened at $0.22 but the buying pressure quickly pushed it to a high of $0.27. Although such prices proved to be too much and ELTP took a step back they still finished the session with a gain of nearly 13% at $0.248. The volume of 5.1 million traded shares was the highest registered by the stock for the past three months.

So what did ELTP announce in order to spark such a positive reaction? Well, several things actually. First, Elite revealed a new sales and distribution agreement with their partner Epic Pharma LLC for ELI-200, an abuse-deterrent opioid utilizing Elite’s proprietary pharmacological abuse-deterrent technology. Under the terms of the deal Elite will receive milestone payments totaling $15 million and a royalty based on net product sales.

Secondly, ELTP announced that dosing of the first subjects for an ELI-200 Phase III clinical study has begun. The goal of the study is to evaluate the efficacy and safety of the drug for the treatment of adults with moderate to severe pain following surgery. It is expected to be completed later in the year with a New Drug Application submitted to the FDA by the end of 2015.

And lastly, a yearend conference call, which should provide more details about the Epic deal and the Phase III study, is anticipated to take place on June 16. The annual financial report is also expected to be completed around that time.
Although ELTP’s financials are far more encouraging than those of the majority of the other pharmaceutical pennystocks investors should still take into account the potential effect of the annual report on the performance of the stock. When Elite filed their previous financial report back in February the ticker suffered a sizeable crash.

With yesterday’s encouraging news the hype around the stock should remain strong for now. As we said, however, the volatility of the ticker shouldn’t be underestimated.