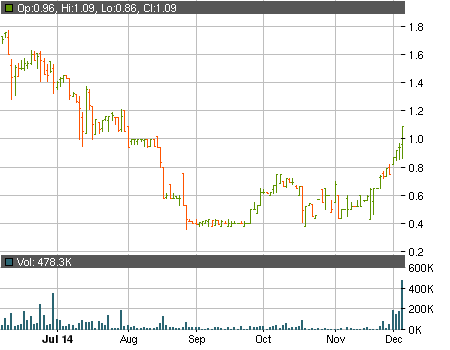 A few months back the stock of New Media Insight Group, Inc. (OTCMKTS:NMED) became the target of paid pump. The Wall Street Revelator put up a landing page touting the company while a couple of pump newsletters, mainly Stockpalooza.com who bagged $30 thousand as compensation, began disseminating email alerts. Despite the bold predictions made by the pumpers though the stock continued sliding downwards. When the promotion came to an end at the end of July the ticker simply lost the ground under its feet and crashed even harder towards the bottom of the chart.

Since then NMED managed to reclaim some of the ground it lost and yesterday after gaining another 15% it closed at $1.09 per share. The climb took place on the unprecedented volume of 490 thousand traded shares that surpassed the average amount for the company of 27 thousand by more than 16 times. There is one major problem though – the impressive performance was facilitated by a new paid pump.

Investors have reported that this time a hard mailer brochure has been put into circulation. In it the Wall Street Revelator assigns the stock a short–term target of $5.25 per share with the potential to rise above $28. Is there a reason to believe that this time their predictions will come true though? Well, let’s see if we can find an answer to that.

On November 25 NMED issued their latest PR message in which the company announced that they have released a new mobile payment solution for merchants, distributors and consumers. New Media’s MPaay solution will enable merchants to offer a custom branded payment and rewards app at just a fraction of the price of the other mobile payment platforms. Although their product seems to have a lot of potential before you jump in it may be for the best to take a look at NMED’s latest financial report. It covers the quarter ending July 31 and according to it back then the company had:

These numbers paint a pretty grim picture but the risks around the stock are much more serious.

The disclaimer at the of the hard mailer shows that the entity paying for the whole pump owns 1 million NMED shares that it could sell at the open market thanks to the increased awareness. Furthermore they also own 1 million warrants with an exercise price of $1 and seeing that the stock is already sitting higher these warrants may very well be turned into shares. In addition, Note 3 of the quarterly report states that since its inception in March, 2010, the company has sold 12 million shares at just $0.005 and 17 million shares priced even lower at $0.0006.

The over-inflated market cap of $32 million, the paid pump and the millions of extremely cheap shares cannot be ignored. If you are determined to play the pump be sure to settle on appropriate time horizons otherwise the losses could be devastating.