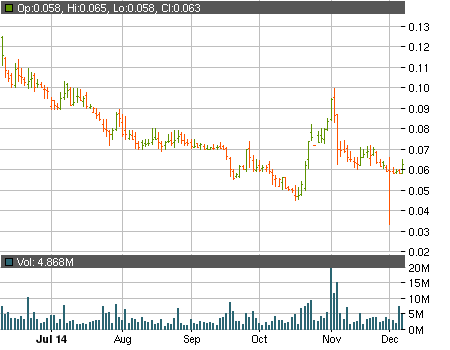 After a couple of rough weeks last Friday the stock of cannabis Science, Inc. (OTCMKTS:CBIS) finally began moving in the right direction. The performance of the ticker was far from consistent though – the session was one wild ride up and down the chart. In the end the stock closed at $0.0627 for a gain of over 8%.

The PR issued by the company early in the morning definitely played its role in the positive outcome of the session. In it CBIS announced that they are almost ready to launch new products throughout the California market. According to Mr. Raymond C. Dabney, CEO, President and Co-Founder of the company, all that is left is to finalize the packaging and the labelling. Maybe these new products will help CBIS strengthen its balance sheet because so far the numbers shown by the company are extremely disappointing. The financial report for the third quarter of the year revealed the following:

For the first nine months of 2014 CBIS have registered a little more than $1000 in revenue. At the same time they have a crushing working capital deficit of over $3 million and an accumulated deficit since inception that has surpassed $100 million.

Having such limited resource CBIS has been relying primarily on its common stock to pay its expenses leading to significant dilution. As of November 17 the number of outstanding shares had already reached 934 million. If you want to see the entire issuance history of the company you can take a look at page F-12 of the quarterly report but let’s focus on some of the more recent transactions. On October 3 CBIS issued 35 million shares as a settlement of just $35 thousand in debt, or in other words each share was priced at $0.001, considerably lower than the current market price.

If CBIS launch any products their supporters might feel reinvigorated and the stock could climb higher. Even if that is the case the continued dilution of the common stock and the millions of free trading S-8 shares that have been handed around could still depress the stock. That is why any trades involving the ticker should be attempted only after doing extensive due diligence and careful planning.