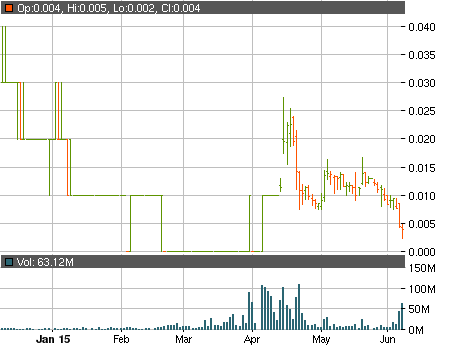 The storm clouds gathered over OSL Holdings, Inc. (OTCMKTS:OSLH) are still not done raining on the company’s parade. After a painful 41% crash on Friday, in yesterday’s session OSLH dropped another 11% to close at $0.004. Share volume increased further, to 63 million shares changing hands in the last session.

The further drop was likely a reaction to the latest 8-K filing OSLH put up on Friday, after the markets had closed. The filing disclosed the issuance of 103 million new common shares, resulting from the conversion of old notes. The same filing informs that the company upped its authorized shares three times, going to a new maximum of 1.94 BILLION, partly to make room for the newly issued 103 million.

OSLH‘s old authorized cap was 649 million shares and the company already had nearly 642 million outstanding shares as of mid-April. Considering how generous OSLH has been with issuing new shares over the past few months, the threefold increase in authorized could be a warning flag for further dilution. The company’s outstanding share count went up 86% within just five months, between Jan and June 2015.

This could partly explain why OSLH got steamrolled from trading at over $0.02 per share in April to its current lows at $0.004 – a drop of over 80%.

The company’s latest PR related to a JV with Cheryl Shuman and the plans for conducting a series “luxury cannabis conferences” starting in early 2016 obviously could not hold the stock up for a very long time. OSLH is on the verge of becoming oversold so a reverse in the immediate future is not unlikely.