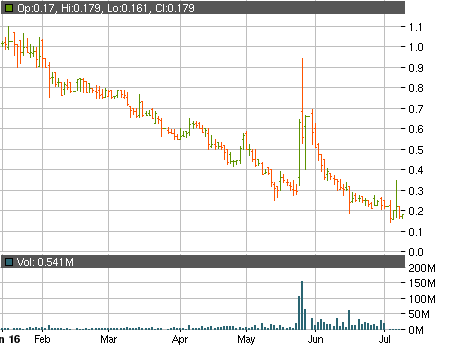 At the end of last week the stock of PositiveID Corp (OTCMKTS:PSID) wiped over 22% of its value and fell down to a close at 18 cents per share. During the weekend the negative sentiment appears to have lost at least some of its strength as yesterday the stock was able to close 4% in the green at $0.179 per share. It must be noted, however, that for most of the trading day the ticker was actually trading in the red and that the positive outcome was only possible thanks to a jump in the right direction in the last minutes of the session.

In the coming sessions the stock could continue to display heightened volatility. Just a couple of day ago PSID performed a 1-for-50 reverse split and the stock is now looking to stabilize at its new price ranges. Will it be able to do so, though?

The red flags surrounding PSID are massive. The split may have reduced the number of outstanding shares to 17 million, down from 840 million, but the threat of dilution is still as serious as ever. Don’t forget that between January 1 and May 6 approximately 120 million shares were issued as a conversion of debt while in the next two months PSID apparently issued another 276 million shares.

The reverse split freed up even more room for the future issuance of shares and the massive convertible debt of the company could lead to exactly that. At the end of the first quarter PSID had $3.2 million in short-term convertible debt that has only grown further since then. The subsequent events section of the quarterly report revealed that by May 6 11 new convertible notes had been sold. The more recent picture isn’t any better with the May 17 convertible note, the two notes totaling $624 thousand from June 2, the June 22 securities purchase agreement, and the most recent notes found in the 8-K filing from July 8.

With the possibility of more shares seeing the light of day at highly discounted prices using caution when approaching PSID‘s stock is strongly advised. In early trading today the company issued a new PR reminding investors about its achievements for the first half of the year. It remains to be seen if this will be enough to prevent the stock from correcting.