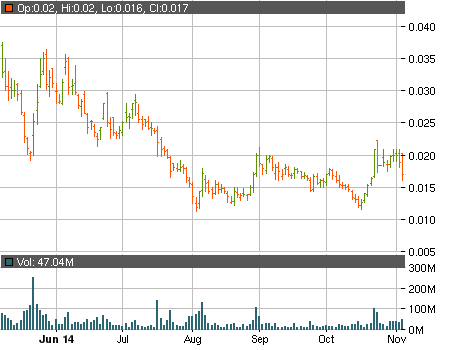 Yesterday’s OTC volume charts were dominated by pot stocks. Virtually the entire sector traded furiously and closed deep in the red. American Green, Inc. (OTCMKTS:ERBB) was among the biggest volume movers, shifting 47 million shares and stopping 10% down at $0.017 by the closing bell.

The oil slick that sent the whole bunch of OTC pot stocks skidding was a combination of two events external to the market but influencing it nonetheless. Marijuana legalization was passed in Alaska, Oregon and in D.C. However, it seems the bad news outweighed the good, as Florida failed to legalize medical marijuana. The state’s laws stipulate that a majority of 60% is required. The votes in favor of medical pot, even though the majority, failed to reach the needed percentage.

This new, more conservative legislative environment and the news of Florida failing to legalize even medical use pot seem to have thrown the market in panic sell mode. All pot stocks slipped by varying degrees, almost universally in double digits and on share volume far above their average. It remains to be seen whether this slide will deepen or it was a one-day panic seizure that will allow pot believers to load up on cheaper shares and help their favorite stock recover.

Meanwhile, ERBB has indeed switched to the ‘when it’s done’ policy regarding the Zazzz machine. When asked whether the Zazzz will be ‘out and running’ by the end of 2014, ERBB‘s official Facebook profile responded with ‘as soon as [ERBB has] the programming complete’. A further inquiry about when that may be remained unanswered.