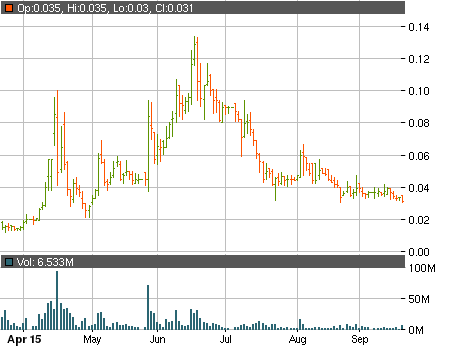 The stock of Propanc Health Group Corp (OTCMKTS:PPCH) has been slowly but surely dropping down the chart registering four red sessions out of the last five. yesterday it closed at $0.0312 for a loss of 7.7%. Despite the rather prolonged decline of their shares PPCH still command a market cap of over $10.8 million.

The latest PR issued by PPCH came at the end of August when the company announced that their patent application for the company’s lead drug candidate PRP was accepted by the Australian patent Office. On the day of the PR the stock did jump 6.7% upwards but the momentum disappeared on the very next day. Investors are still hoping that when PPCH officially announce the results of the pilot animal studies it will be enough to push the stock in the right direction. On August 13 PPCH also stated that the preparations for the next round of full scale efficacy studies are underway.

Will this be enough to offset the numerous red flags though? PPCH‘s financial state is far from impressive with the company finishing the quarter ended March 31 with:

During the period 135 million shares were issued as a conversion of debt at a price of just $0.002 each. As of March 31 PPCH listed $1.13 million of its liabilities as convertible notes. Although the company did reduce its authorized shares drastically – from 10 billion to 2 billion, that still leaves plenty of room for the conversions of debt to continue.

By the end of September PPCH should file their annual report and it will show exactly how many shares saw the light of day in the past couple of months as well as any new convertible debt taken on by PPCH. If the information in the report leaves investors disappointed the stock could begin falling down even faster.